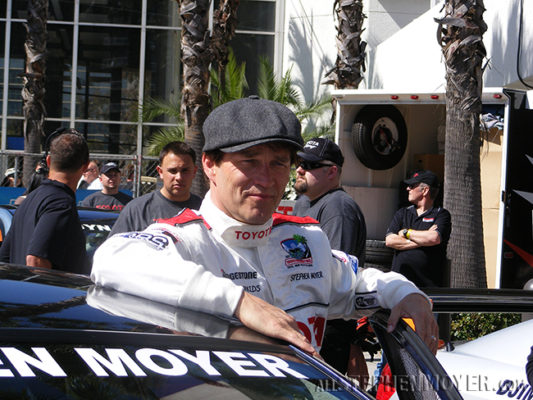 Unfortunately, Stephen Moyer will not race again this year.

Last year, you may recall that Stephen Moyer participated in the Toyota Pro-Celebrity Race in Long Beach, CA.  Because of his driving, he earned $15,000 in prize money for his charity Facing the Atlantic. He did this by coming in with the fastest lap in Friday’s trial race for position. This also meant that he had won pole position (first position), for the next day’s race.

Unfortunately, Stephen had to back out of the race at the last minute. After the now famous “car flip” it became apparent that the racing was too dangerous for him. HBO asked him not to participate due to insurance reasons. Even so, he was recently listed by Yahoo Sports as a top celebrity race car driver.

The list of this year’s participants was released and Stephen’s name is not among them.  Therefore, we must assume that he will not be participating. However, another True Blood star will race, Season 5’s newest vampire, Christopher Meloni. The race takes place on Saturday, April 14, 2012, in Long Beach, CA and we wish Chris the best of luck.

To learn more about Stephen’s participation in last year’s race, go to our exclusive “behind the scenes” coverage of the event by clicking here.