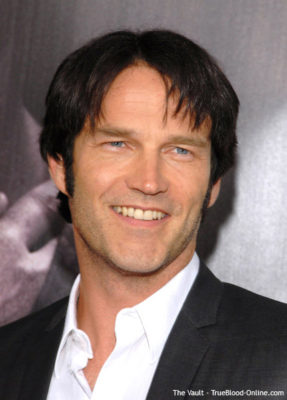 When Stephen Moyer auditioned in London for the HBO drama “True Blood,” the Englishman didn’t know whether he could pull off the accent needed to play Bill Compton, a 170-year-old Louisiana vampire.

“I hadn’t done a Southern accent since I pretended to be a cowboy when I was 7,” Moyer recalls. “I hadn’t practiced at home, because I’d literally gotten the script the night before, but when I opened my mouth when we were doing the take, it was just kind of there.“

“Honestly, I wasn’t really surprised by the show’s success, because I knew Alan was creating the kind of stuff I’d personally be interested in watching,” he says.

Many fans seem most interested in Moyer’s feverish chemistry with co-star Anna Paquin, who plays ingenue protagonist Sookie, a human who can read everyone’s mind except his.

“I honestly think whether the attraction is there or not, you have to create it,” he says. “I’m lucky because with Anna it’s there.”

In fact, the onscreen lovers developed an offscreen relationship early during the first season, although they didn’t tell the crew until “around the 10th episode.”

“We didn’t want it to look like our relationship was some sort of cheap attempt to get publicity, because it never was,” he says.

Not that his relationship with Paquin in any way deters bloodthirsty fans from asking for a bite.

“I get the Robert Pattinson leave-offs,” Moyer says with a laugh, referring to the young star of the hugely popular “Twilight” vampire movie franchise. “The ones who get to a certain point and think he’s a boy. There’s the Pattinson gang and the Moyer gang.“

“I love that he has 170 years of experience to draw on, and I like the idea that he’s read every book and learned every language and learned all the music that he was never able to learn when he was alive. I love his longevity and maturity.“