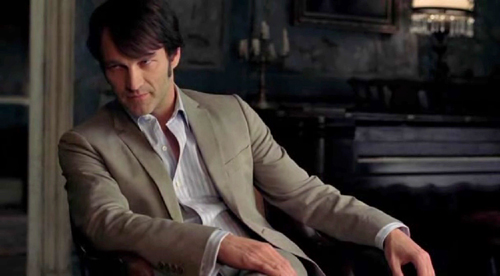 True Blood is HBO’s fang-tastic new vampire drama, based on Charlaine Harris’s popular series of books, The Southern Vampire Mysteries. Abbie Bernstein caught up with one of its stars, Stephen Moyer, to talk about vamping it up…

True Blood isn’t Stephen Moyer’s first time as a vampire. However, this is the first time he’s had to wear fangs, he explains with a laugh. “I did play a vampire in 1998, in a [BBC] series called Ultraviolet, and I have these canines that you can see.” He displays his teeth in a cheerful smile, displaying surprisingly large real canines. “So we decided [in Ultraviolet] not to give me fake teeth. But in this one, we have different teeth. It’s quite funny. As a kid, I had to wear a retainer to push the teeth straight. And [wearing the True Blood fangs is] like having a retainer. You kind of have to [puts on lispy voice] talk like this and you have to learn to talk with them in!

“It’s quite difficult, but we’ve all got much, much better at talking with them in,” he continues. “There was more looping [re-recording of dialogue] at the beginning, but people have got better, and we’ve kind of reduced the size of the teeth a little bit, so actually, there’s very little looping now.”

Coming out of the coffin

Essex-born Moyer has worked all over the world – he’d recently wrapped up the USA miniseries The Starter Wife – and had just returned to England when he was approached about auditioning for True Blood. At the time, he was unfamiliar with Charlaine Harris’s books, The Southern Vampire Mysteries, about what happens when vampires “come out of the coffin” in a small Louisiana town and try to integrate, with varying degrees of success, with human society. The focal point of the books and the HBO series, adapted by Six Feet Under writer Alan Ball, is a telepathic human waitress, Sookie, played by Anna Paquin, who scandalizes her small town by befriending Bill (Moyer) the vampire.

“I wanted to be back in London,” Moyer says, “I wanted to be with my kids, and so I turned down a few scripts. I didn’t want to come to America straight away, but then they sent this and I found out it was by Alan, I read it, and put myself on tape the next day. Alan saw it that afternoon and I flew [to the States] the next morning. As soon as I got the job, I started doing the research and reading the books. My character’s from the American Civil War, so I started reading about that. I could totally understand what Alan saw in [the books]. Sookie’s amazing, Bill’s a fantastic character and the world that Charlaine sets up is just unbelievable.”

Funnily enough, Moyer says that he and Anna Paquin virtually had to trade appearances. “When we had those initial meetings with Alan, I was tan and blonde, and she was white with black hair, and we’ve kind of reversed roles completely.” Moyer has had his hair dyed black, while Paquin’s hair color is now Sookie’s gold. Likewise, Moyer enjoys the California sun, but vampires aren’t supposed to tan, whereas Sookie has to be even rosier than usual to contrast with her new nocturnal friends.

Also in the cast is Alexander Skarsgard, lately of HBO’s miniseries Generation Kill, as high-ranking vampire Eric. Moyer explains that between Bill and Eric, “the relationship is one of respect but mutual dislike.

“His character’s a thousand years old and my character’s 170 years old,” he continues. “And, in our story, the older you are, the stronger you are. So [Eric] is very strong and even though Bill can stand up to him and fight him, he ultimately has to kowtow to what Eric wants him to do. Apart from in one respect, and it’s very important, and that is that when we have a [human] girlfriend. When a vampire has a partner, another vampire is not allowed to encroach on that turf. So as much as Eric would like to, he can’t, because it’s against vampire law and that of course is a big lure to Eric.”

Bill’s back-story, before and after he became a vampire, is of great interest to Moyer. “We go [in flashbacks] to the American Civil War. We go back to Bill when he was turned, over 140 years ago, in 1862, when he went off to fight in the American Civil War. Three years later, he comes back, and that’s when his life changes. He’s got a family, he’s got a wife, and we see him revisit that in his mind.

“That was a beautiful thing to do, it was very moving, and it was amazing for me doing the research into that period of time, because it’s not something that’s taught in British schools. I’ve got ideas [about Bill’s past]. I learned that the character who turns him is somebody that he’s attached to. In this world, when you’re turned from a human into a vampire, the person who turns you has power over you and you’re linked to them inextricably.”

Moyer knew series creator Alan Ball and New Zealand actress Anna Paquin, both Oscar winners (Ball for American Beauty, Paquin for The Piano) by reputation, but he insists he had no preconceptions about either of them. “One of the great things was, that first day that we met [about True Blood] was the first time that I’d met Alan and Anna. I think Alan’s an extraordinary genius and there was this link – there was an amazing conjoining thing between the three of us!”