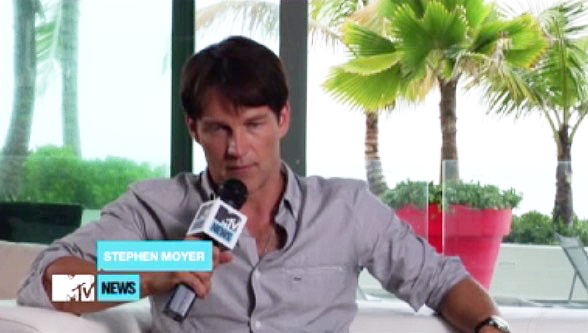 MTV interviewed Stephen Moyer and he teases Season 5. At the junket for his mystery-thriller “The Caller” (opening in limited release today), and MTVNews begged for some scoop about Season 5 of True Blood. And Stephen delivered, teasing that this season’s arc is setting us up for potentially bigger things to come.

“Obviously I’m not going to tell you what happens at the end of this season, but it’s very much heading towards already what is going to happen in season five,” he said. “And it sounds amazing.”

Stephen goes on to say, “I know there is going to be an omnipresent power in season five,” he hinted. “I know what it is. I think we could be heading towards an even greater season. If they go where they’re going, it will be amazing and upset a lot of people, which we always like.”

Tell us your thoughts about what this new “power” could be in Season 5 by leaving a comment below.