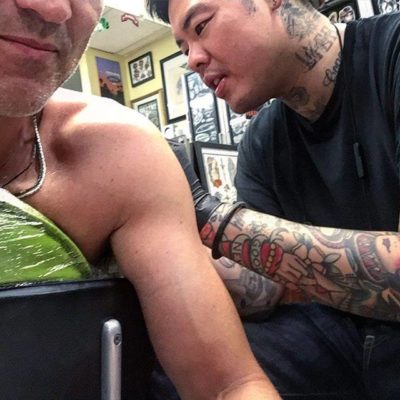 Stephen had hinted in the past that he might get a tattoo one day. Well, that day has come!

On his Facebook page he posted a pic from inside a tattoo parlor, where he is getting ink on his left shoulder blade, it seems. Apparently, it’s a larger or complicated image he’s getting, since he mentions that it’s “another pleasurable night.”

The pic was probably taken at the Shamrock Social Club in West Hollywood, the workplace of the renowned tattoo artist Dr Woo, hailed by the media as “the most in-demand tattooist in the world”. There is a long waiting list to book an appointment with Dr Woo, and it could take months of waiting before it’s your turn. Yet people are lining up, including Hollywood’s elite, because of the quality of his tattoos and his unique style that LAWeekly described as “his intricate work looks like finely detailed pencil drawings, pressed directly off the pages of sketch pads.” Celebrity clients of Dr Woo include Zoe Kravitz, Sky Ferreira, Ellie Goulding, Cara Delevingne, “Khaleeshi” Emilia Clarke, Drake, Francis Bean Cobain and Miley Cyrus.

We can wait to see Steve’s ink! What image do you think he had tattooed on his back? His children, Anna, the dog, a pair of fangs, the West Ham logo?