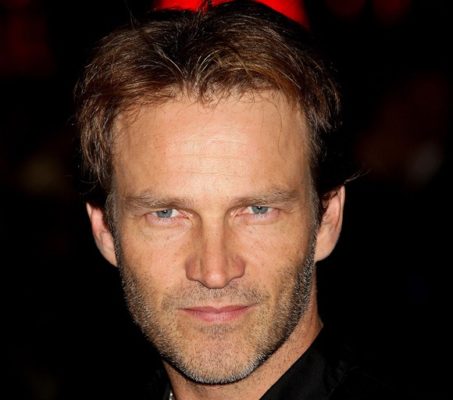 The British Mirror interviewed Stephen Moyer recently and below is that interview where he talks about getting the part, sharp teeth and Bill. 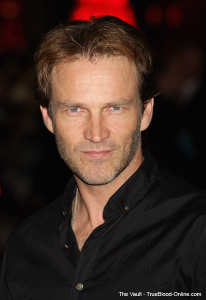 Are there any actors in your family?

No, but my aunt and uncle were holiday camp entertainers and one of my earliest memories is of going to the Isle Of Wight every summer and watching them perform. My uncle Tony was my absolute idol and he used to do these fantastic impressions – I can remember him doing Elvis. And they also did magic. I think a little bit of that stayed with me. And then I started doing plays at school and loved it.

How did True Blood come about?

I’d got a job at Fox playing this character who was a bit like the new Jack Bauer (from 24). It was an amazing gig. I’d put myself on tape and flown in to meet the people there and they’d loved it and it all seemed great. Then the show didn’t happen and it was all a bit of a mess. I came back to London and said to myself, ‘I’m not doing that again.’ It was just so upsetting and frustrating and that had happened to me before, and I actually said to my manager, ‘I’m not coming back.’ The Starter Wife, which I’d done with Debra Messing, was coming out and I just thought I’d go back to the UK and be with my kids. Then my agent called and said, ‘Look, even though the Fox job didn’t happen, your casting tape from that audition has been doing the rounds and people are talking about it. I’m getting scripts right, left and centre.’ Eventually she said, ‘There’s one I really think you should read. Please, just read this one.’ And I read it. The script was by Alan Ball for True Blood. And it was absolutely fantastic. I couldn’t believe it, it was amazing.

So you went back?

Well, at first I put myself on tape for it. I went to see a casting director I know, Nina Gold, who’s been great to me, and she emailed it off. Alan saw it that afternoon and called back and said that he wanted to meet me. I flew that night and I was sitting in front of Alan 14 hours later with Anna (Paquin) reading the part of Bill. The next morning I went to the HBO office and read it for some of the guys there and that was it, I was cast. Two days!

I love him. He’s amazing. I love his back story. I knew from the character break-down he had kids and he’d been forced to leave them and it gives you a sense of this man who has to feed on blood, but it’s the last thing he wants to do. Also he is profoundly moral, so he has no qualms about killing if it’s for the right reason. You’ve got this romantic, old-fashioned gentleman who also happens to be a vampire. And the audience has to wonder about that conflict within him and wonder what he is capable of.

Bill is quite a snazzy dresser, too, for a vampire…

When you first see him he looks like your classic vampire – he’s dark, he’s moody, and he’s brooding. But in episode 2 (of the first series) we tried to show that he smartened himself up a bit – he changed his hair, the way he dresses – because he’s trying to make Sookie and her family feel more at ease with him. Actually, one of the reasons I love this job so much is because we are playing with so many ideas. Like his costumes – the costume designer will come to me and say, ‘How about we try this?’ And it will be a little thing like having his collars turned up on a certain jacket that gives a hint of the Confederate soldier, just a little echo of part of his past.

Yes it is! It’s sexy, it’s dark, it’s twisted, it’s funny and it’s romantic. I think we’ve all been surprised by how much people have enjoyed the romantic aspect of it. But Alan is so clever because the character that is doing all the addictive sex isn’t Bill, it’s Sookie’s brother, Jason (Ryan Kwanten). He’s got his own problems. So the character you expect to be like that, isn’t like that at all. Bill is actually old-fashioned and cool.

The chemistry between you and Anna Paquin is clearly important.

Yes it is. And she’s amazing. From the first moment I met her, the moment we sat together on the sofa doing a scene for Alan, I knew we’d get along brilliantly. I used to teach kids drama and I used to say, ‘There’s no failure, it doesn’t exist. You can do whatever you want and if it doesn’t work it doesn’t matter because you’ll be able to use something from it.’ And with Anna we both sat there and said, ‘Let’s play with this.’ So on the first day we met each other we were walking around working the scenes together. ‘What if I do this? Or how about this?’ It’s an absolute dream to work with someone like that.

Why do you think we’re all so obsessed with vampires?

You’ve got immortality, you’ve got blood and you’ve got sharp, pointed teeth making a hole and sucking from it – (laughs) that’s sexy, man.

Ah yes, the teeth. How are they?

I’ve got three sets and they’re sharp and they go on to the eyeteeth as opposed to the canines – and actually I have quite pronounced canines. But they take some getting used to, I can tell you. And there were times, especially early on when we were still getting used to them, when the guys playing vampires would sit around between takes and we’d be talking about football and they’d say, ‘OK, camera’s rolling, everyone put your teeth in…’ When we first had to get used to the vampire teeth that was hilarious.

We shoot it twice – we shoot it leading up to the moment when the teeth appear, they CGI that moment, but apart from that, it’s all real!

You’ve got two young children, but True Blood isn’t something they’re going to be able to watch for a few years…

You’d be right. But my son’s called Bill and he thinks vampire Bill is named after him and he’s desperate to see it.

True Blood Season 1 has released on DVD in the UK. True Blood is on Wednesdays, Channel 4, 10pm