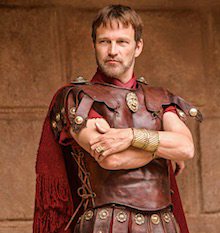 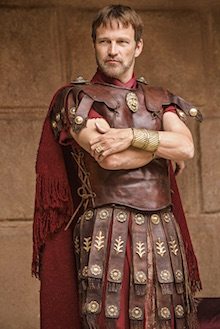 This post is about the scenes with Stephen Moyer, after he has just arrived on the set of his new mini-series, “Killing Jesus” with only three hours of sleep after a numbing 20-hour journey. His exhaustion serves the pivotal scene which he discusses below.

The events that take place are the culmination of a power struggle between Roman governor Pontius Pilate (True Blood’s Stephen Moyer), the high priest Caiaphas (an intense Rufus Sewell, whose eyes flash against his inky black robes), and Jerusalem’s reigning ruler Antipas (Eoin Macken, The Night Shift). Antipas has assumed the title — and the wrath of the Jews — after the death of his father Herod the Great (Kelsey Grammer), who ordered the slaughter of all male babies in Bethlehem to prevent the rise of the rumored newborn Christ.

Having been volleyed back and forth between Pilate and Antipas, a battered Jesus stands before Pilate, who urges Caiaphas that scourging is punishment enough, knowing that he cannot rule without the support of the powerful priest. As the steely Caiaphas, Sewell bellows for the death of this one man to extinguish his dangerous revolution. At the monitors, everyone smiles.

“When he first gets to Jerusalem, he puts the emperor’s face on banners, which is idolatry, so he is on a back foot from then on and needs the priests to be his conduit. One of the questions I think is interesting is when this type of story is being told, we don’t know about what else was going on at the time. The story is always about Jesus, but we don’t know how many other decisions Pilate was having to make, how many other councils he was taking, whether this was even important to him.”

Read this entire article by going to: channelguidemagblog.com