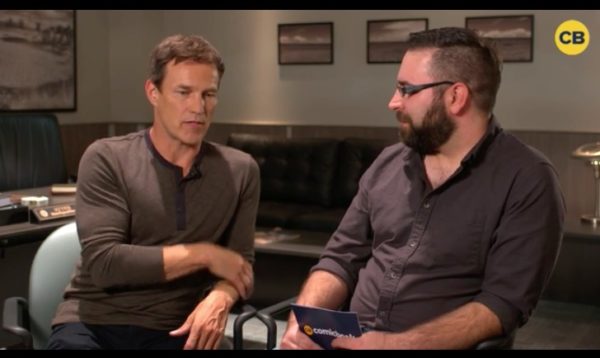 Although Stephen Moyer may have left the world of vampires, his new show, The Gifted that has some similarities to the supernatural world.  The Gifted world may be surprisingly familiar based on Moyer’s role of Bill Compton.

CLICK ON THE IMAGE BELOW TO WATCH THE VIDEO with Jamie Lovett of Comicbook.com 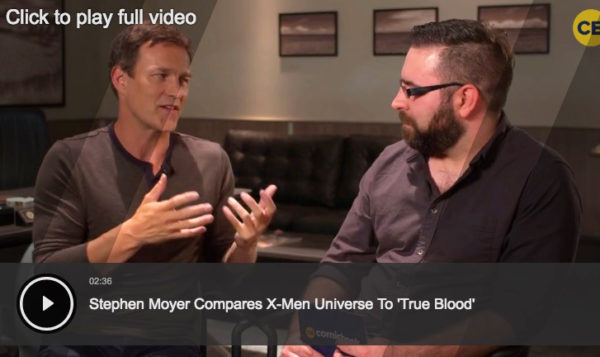 Stephen talks about the similarities between True Blood and The Gifted.

The way that True Blood used vampires as a metaphor mirroring real-world society is similar to how Marvel has traditionally used mutants. While visiting the set of The Gifted in Atlanta, Jamie asked Stephen how he thought the worlds of True Blood and the X-Men compared.

“I think that there are massive parallels,” Moyer said. “You know, there’s no question that people who watched True Blood – it was very adopted by the LGBTQ community and a definitely by a multiracial universe, and vampires obviously were a metaphor for being disenfranchised. One of the characters actually says at some point, ‘They’ve come out of the coffin,’ which is obviously a reference.”

Moyer also points to a division among True Blood’s vampire that’s similar to the division between mutants who follow Charles Xavier’s dream of peaceful coexistence with humans and those usually categorized as “evil mutants.”

“And so really that show is about every bit as similar to The Gifted in that these vampires are trying to live in society and we’re not going to eat you because we’ve got this new product, but there are some other ones who still want to eat you because the product tastes like s—t,” Moyer explained. “There are massive parallels because it’s about civil rights and its a framework to tell a civil rights story, just as most science fiction is.”

Moyer went on to say that this narrative is part of what allows The Gifted to stand out in an increasingly crowded superhero media landscape.

“I think what makes ours a little bit different is it’s about the human element within the superpower world and how the humans sort of react to it and get to live with it,” he said. “And its also about survival. It’s a bit sort of gritty and underground and literally doing what they can. We’ve got refugees arriving and coming into our place because the Sentinel Services are really clamping down now, so its sort of a dark world out that they’re trying to escape from, so its really about survival rather than being proactive, although I’m sure that’s about to change.”

BELOW ARE A COUPLE OF SCREENSHOTS FROM THE INTERVIEW: