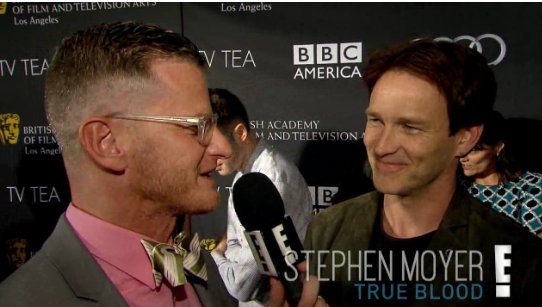 Stephen Moyer spoke to Mark Malkin at the BAFTA Tea Party on the Red Carpet yeaterday and they discussed Alexander Skarsgard’s “full frontal” scene in the True Blood Season 6 finale.

The True Blood fans were not expecting to see Alexander Skarsgård’s full frontal exposure when Eric went up in flames during last month’s season finale.

“It was never intended that way,” Stephen Moyer told me yesterday at the BAFTA LA Tea at the SLS Hotel. “It was never written to have him full frontal. Alex doesn’t like wearing his ‘sock’ or the ‘sack of destiny’ as we call it.'”

His sack of what?

“It’s the sack of destiny that covers everything,” Moyer laughed. “He doesn’t like wearing those so he had one in his room that day [but] he was the one who chose not to wear it.”

Moyer says the crew had unsuccessfully tried some “camera trickery” to hide the goods. And Stephen added that he has no plans to follow in Skarsgård’s full frontal footsteps. “I’ll save that from the crew,” he cracked.

Meanwhile, like Carrie Preston first told us, Moyer says cast and crew suspected that season seven of True Blood was going to be its last. “We wanted to go out on a real high,” he said, adding, “It means the writers can go in the room and they can arc out the season and really go for it. We’re all quite excited about that.”

Moyer joked, “I want him to end up in a little white house with a white picket fence.” Perhaps he’ll find a white coffin to go with it.

Click on the image to go to their site to see the video.