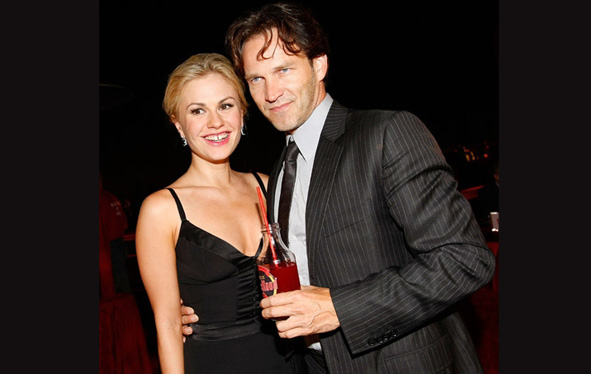 Stephen talks about how True Blood changed his life and about vampires, his romance with colleague Anna Paquin and his friendship with Alexander Skarsgård.

Stephen plays a 175-year-old dead guy. Pale, with black hair, fangs and a look that could kill.

Bill Compton is a vampire with a southern accent.

In reality, Stephen Moyer, 38, brown hair, an infectious smile and an accent that shows that he is an English man at heart. He was close to giving up his Hollywood career to stay home and be a father.

“I had gone to the U.S. for a job in a TV series that was predicted to become the new “24”. But that project fell through. It was incredibly frustrating. I had enough.

He had gone through a divorce on grounds of his career. The long periods abroad had left their mark. And Stephen has also two small children in London.

“I had enough after going back and forth for so many years. My manager did not want me to give up because everyone in the industry knew I still had this incredibile role and now was my chance. But I was tired of being disappointed.

But as so often happens once you decide to stop, there comes un offer that you cannot say “no” to. It was a role in the new HBO series “True Blood” wich is about a world in the not too distant future where people live side by side with vampires who are now living on synthetic blood.

I emailed a screentest, Alan Ball saw it, called back, I flew to the U.S. the next day to see him and Anna Paquin and got the role. The was all decided in three days.

In his new role, he also found love. But the only time Stephen Moyer is silent in this interview is when rumors of his romance with Anna Paquin are being discused.

“Are there rumors about that? I cannot really talk about it,” he said, laughing nervously.

His friendship with Alexander Skarsgård, who also plays a vampire, is however different case.

“I love him! We are very close. He is extremely funny, a little crazy. Anna said that her favorite moments on the set are when we are together. It is complete nonsens and we talk non-stop.

The Second season of True Blood:

“I am thrilled and the series has an incredibile potential. I usually say no to playing the same role twice, but now I look forward to the second season that we will start filming soon. I have already been offered several other jobs, thanks to this role, which I hoped would happen.

Swedish vampire film “Let the right one in”

“I heard about that and it should be pretty good. It is about a child who is a vampire, right? I really have to see it.

Being a dad and playing a vampire:

It is a nightmare. My son Bill, thinks the series is about him. It is a pity that he cannot see it, it is far too bloody. But he knows it is about vampires and at home he says that I am the king of all vampires.

He is a very moral person, because of his background and how he became a vampire. He i salso very sexual, but diabolical in mind and fearlessly revenge on those who do him wrong. The series turns the stereotypes about vampires upside down and shows how different a vampire world could be.

Note: This article has been translated this from Swedish to English. I don’t speak Swedish and English is not my first language, so if some sentences seem a bit weird that is my mistake and not Stephen’s.