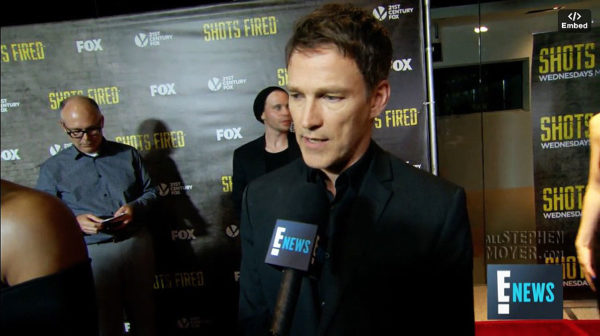 Tonight Stephen Moyer’s new TV series, Shots Fired premieres on Fox and we know that all his fans will be glued to the TV to see Officer Breeland.

Below are two video interviews and some screenshots from each video of Stephen being interviewed.  First, we see him at the Shots Fired Premiere last week in LA and then, with Mack Wilds during the Television Critics Association day a couple of weeks ago.

For True Blood alum Stephen Moyer, who stars as Lt. Calvert Breeland, the seasoned Sheriff’s Department vet caught in the middle of the investigation, the series is a reminder that we can’t turn a blind eye to what’s going on in the world and expect it to all just go away. “What I think Shots Fired is about is community and America,” he said. “For me, race relations and what’s been happening with the police and everything that’s been going on in the last few years is what America has become and we have to understand it and we have to be empathetic towards it. We can’t ignore it.”

For more from the trio, be sure to check out the video above. Shots Fired also stars Will Patton, Aisha Hinds, Clare-Hope Ashitey, Conor Leslie, DeWanda Wise and Richard Dreyfuss, along with special guest stars Helen Hunt and Jill Hennessy. 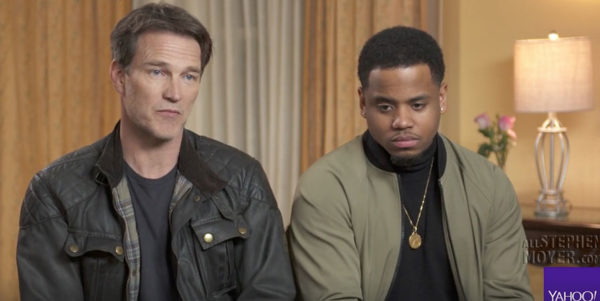 Tristan Mack Wilds and Stephen Moyer are acutely aware of the tense environment that police officers operate in on a daily basis, and they understand that those feelings of apprehension a two-way street. “My experience of police officers is that if somebody came up to me, I immediately thought I’d done something wrong, sometimes I had,” Moyer explained to Yahoo during the Television Critics Association in January. “But there’s a sense of trying to dispel that, of trying to make people feel good.”

On the series, the former True Blood star plays Lt. Calvert Breeland, a small-town North Carolina cop who believes profiling works, but that belief will be put to the test when a black officer, Sheriff’s Deputy Joshua Beck (Wilds), shoots a white teen. To fully understand their characters, both actors spent time shadowing real police officers; Wilds spent time with the NYPD, and he felt the experience gave him the chance to see the world “through the eyes of the everyday cop.” What struck him by the meeting was the “sense of camaraderie between them and other officers. As soon as another officer rolled by, and they see us pulled over with the lights on, they pull up, and it’s an instant, ‘You good? You need us here?’” Wilds was particularly struck by the fact that “everything was brotherhood with them, and sisterhood as well.”