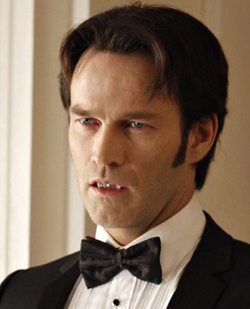 This week Stephen Moyer spoke with Zap2it and he revealed some interesting facts about Bill’s past.

“There’s a couple of great flashbacks this year,” Stephen Moyer, who plays Bill, tells Zap2it. “I love the flashbacks because what’s interesting is that you as an actor playing these characters don’t get a chance to really understand who your character is, because the writers are able to invent things from your past that you didn’t know about. So, it just keeps adding color to your characterization as you go.”

Some of the most achingly gorgeous (and telling) scenes of the series occur in flashback. Moyer gave us a couple hints of what we’ll be exploring in Bill’s past.

“We will see one of the reasons why Bill is so tortured,” he explains. “There will be something that explains how his relationship with Lorena evolved. There is some beautiful stuff in there.”

Moyer says that it can be a challenge to play a character whose past isn’t already laid out for the actor. But, he takes it as it comes.

“I think that you have to play your stuff in, I believe, in absolute truth in the moment for then and for that scene,” says Moyer “There are certain occasions when you have prior knowledge of what you did before that may inform that situation, but ultimately you might not know that something you are saying like in Episode Four has a direct correlation between something that you did in 1848, because it hasn’t been written yet.”

He adds, “I think there has to be a certain amount of dramatic license that has to be accepted with these kind of shows where to make the characters deeper and richer and to yield kind of more complex relationships we have to kind of suspend our disbelief slightly as far as what we learn about them as we go. Because the actor is learning at the same time, you know. But that for me is one of the things that’s most extraordinary about it.”