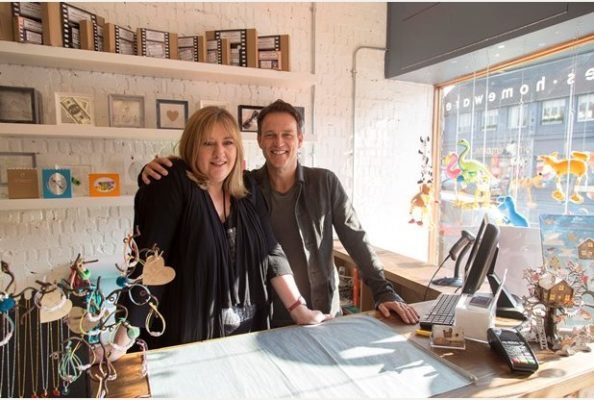 We’ve already been helping to publicize Steve’s sister Amanda’s new store, “Todd Sloane.”  Just look in our left sidebar to see the proof.  We are so happy for her and wish we could visit and buy some of the great things she has for sale there.

Her brother, Stephen Moyer has thrown his support behind his sister’s new business venture.

He took time out of his own hectic schedule to help out after shooting a major TV series for ITV in Anglesey but has since returned to his home in the United States.

“The shop looks fantastic and of course Amanda is a Brentwood girl.”

Amanda said the idea for the shop came as an culmination of experience in retail and while working for Britvic in Chelmsford.

“We sell gifts, accessories and homewares, a real mix of things. There is stuff for children and cool jewellery and all the furniture is for sale.

“Everyone who comes in really loves the shop the main thing is just getting to know that we are there.

“Its amazing how many people come come from the A414 side and only go as far as Tesco.”

Stephen explained he has been filming recently for an ITV drama called Safe house.

“Last year it was very successful with Chris Ecclestone in it. They change the person playing the lead character every year and this year it’s me. We had two months’ filming. There were five weeks in Liverpool and four weeks in Anglesey, and we have had absolutely beautiful weather.

“We had been thinking that every time we went over the bridge we were going to have thunder and lightning but it was beautiful.“

Stephen is now back in the US after stopping off in Montreal where his wife Anna Paquin is filming a TV drama.

“Me and my wife have always shot at different times but this time we couldn’t do it. Five weeks ago I flew to Toronto and stopped off for 36 hours to give the kids a squeeze and then flew back but I’m done now.”

The former star of True Blood, who made is stage debut while a member of Brentwood Operatic Society as a teenager, has a number of projects about to be screened.

Stephen still has family in Essex, as his mother lives in Billericay and his father in South Woodham Ferrers, and Stephen says he does make it back to the county as much as he can.

“I visit Essex fairly regularly although I don’t get much of a chance to see my old gang in Herongate. I haven’t been to the village for a long while but a lot of my best friends are still there.“