Stephen Moyer is featured on the Mr Porter website with an interview and a very stylish photoshoot.

Stephen is out­fit­ted in the retailer’s smart offer­ings that include essen­tials from Marni, Brioni and other cov­eted labels.

In a shabby motel room in Hollywood, complete with peeling paint and ripped-up sofas, Mr Stephen Moyer takes a look around and breaks into a broad grin. His daughter is with him, sunbathing by the pool down below. He’s just finished an afternoon of pictures for MR PORTER, and his weekend is beginning. From where he’s standing, things look pretty good.

“I’m not going to lie, I am very happy,” he says. “And it’s mostly because West Ham are back in the Premiership!”

In truth, he has many reasons to be cheerful. One: he’s married to the beautiful Ms Anna Paquin; they live near Venice Beach with two dogs. Two: she’s pregnant. And three: at the age of 42, after 20 years as a jobbing actor, Mr Moyer has finally hit it big, as the star of HBO’s steamy vampire drama True Blood, a show with the kind of following that only vampires seem to inspire.

“I just got back from New Orleans, where we were shooting on Bourbon Street and it was nuts – we literally had 2,000 people out there with us,” he says. “And there was this group of girls who had flown in especially, waited for five hours before we arrived and stood there all night, just to watch. One of them even took money out of her mortgage to pay for it!”

It’s not quite the obsession that surrounded Twilight star Mr Robert Pattinson, but it is close. Ladies love a vampire. And like Mr Pattinson, Mr Moyer is not so much amused or baffled by the phenomenon, as fascinated. He’s given it a lot of thought during the five years he’s been on the show.

“It’s about romance and power and fantasy,” he says. “Vampires have a sort of brooding presence that goes back to Gothic literature. There’s often a dark, enigmatic man involved, such as Mr Rochester or Heathcliff. And a vampire also treats you with old-fashioned manners, while at any point he could overwhelm you and rip your life away. There’s something very sexually exciting about that. Look at Fifty Shades of Grey.”

So it’s no accident that many leading Hollywood vampires have been English, he says. Aside from himself and Mr Pattinson, there was Mr Gary Oldman in Mr Francis Ford Coppola’s Bram Stoker’s Dracula, and before that Sir Christopher Lee. “Vampires are from a period – 150 years ago, say – when there was a more courtly way of being. So an English sensibility fits that better.”

Mr Moyer might do “courtly” perfectly well on camera, but he’s a far cry from that in person. A T-shirt and jeans guy who likes to race go-karts and saloon cars, he’s seldom seen in a suit, or even a dress shirt for that matter. “Boots, that’s what I’ve got,” he says. “Loads of pairs of boots. In London I would wear a pair of shorts and a pair of boots from 1 April to 31 October, and I would never be seen in anything else.”

He hails from Essex, from solid working-class roots. His dad, who he describes as the “simplest, kindest and happiest man I know”, runs a double-glazing business. His uncles and grandfather worked at the local Ford factory. And childhood was a happy time of mischief, football and church, by all accounts.

“I was head chorister,” he says. “So I would lead the choir up the aisle at the beginning, and carry the cross. But I used to play football on a Sunday morning too, so I’d still have my football boots on underneath my cassock!”

So the cross carrier became a vampire in later life.

“Ha! I never even thought of that!”

The choirboy kept singing – he started a rock band called The Prophecy – but while the music ebbed, acting remained a constant. After drama school he joined the Royal Shakespeare Company, was booked for various TV roles, a Mr Pete Townsend rock opera, a movie with Ms Katherine Heigl called Prince Valiant… and on it went.

“To this day, I haven’t done another job,” he says. To be fair, not everything on his résumé was immediately memorable. Remember Comic Act, Men Only and Trinity? Neither do most people. But Mr Moyer doesn’t mind – he’s a pragmatist. “Apart from the top five percent of actors, everyone just says yes to everything. You need to pay the bills!”

Still, those early years of finding his feet as an actor were a blast. In another bit of foreshadowing for his future life as a vampire, it turns out he spent much of the 1990s below ground level.

“Yeah, I lived on a canal boat for seven years – 1992 to 1999,” he says, smiling at the memory. “There’s a canal that goes through London and the interesting thing is, it was built 200 years ago, so as the roads and everything have built up around it, the canal stays at the same level. So canal life is a very underground, subterranean, little nether world.” He laughs. “They were pretty wild years – ‘Would you like to come and sit on my 62ft purple vessel?'”

As Mr Moyer entered his thirties he moved to a more traditional home in West London. And though he kept trying to break into American television, his luck was patchy. In fact, by the time True Blood showed up he had reached the point where he’d had enough of trying. He’d been recently burned – having shot a pilot for Fox, the studio fired the entire cast. But beyond that, he had two children (a boy and a girl), he was closing in on 40, and he wanted to stay at home in England. American stardom was no longer a dream worth chasing.

“I’d been coming to LA for pilot season and I just couldn’t do it anymore,” he says. “You wouldn’t believe what it’s like. You’re doing five auditions a day, literally cramming lines and you don’t know which one’s going to be good. It’s a total crapshoot.”

But no sooner had he returned to London when his agent called. “She said, ‘There’s this script.’ I said no, I’m not interested, forget it. She said, ‘I won’t ask you to read anything else all year.’ And it was True Blood – definitely one of the top three scripts I’ve ever seen. I put myself on tape the next morning and had it emailed to the creator, Alan Ball. He saw it that afternoon. And I got on a plane the next day.”

He considers how swiftly his life changed in those few days. After all, he didn’t just win the role of a lifetime, on that trip to LA – he met his future wife and settled in California.

“Yes, True Blood has been good to me, I’m not going to argue with you,” he laughs. “But the important thing that happened was a psychological shift. I’d reached a point where I was like, ‘OK, I’m not chasing this anymore. I don’t need it.’ And when you make that shift, it’s very profound. Things happen. That’s why I got the part that day. There’s just a different feeling in the air when you’re not worried about getting the job or not. You might want something but when you realise that you’ll be OK without it, that’s when it comes to you.”

He waves at his daughter in the pool below. Big smile on his face. “And five years later, here I am.” 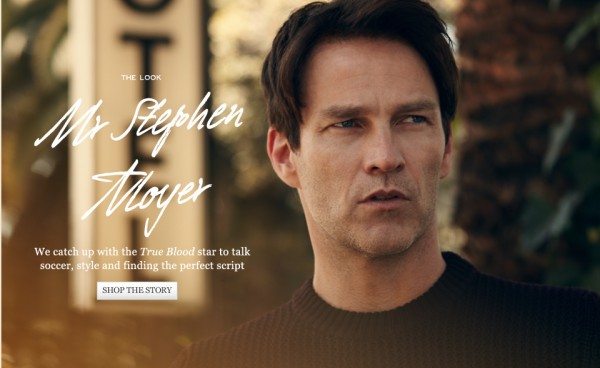 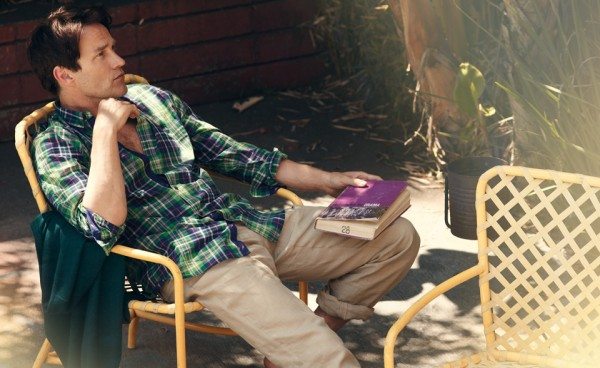 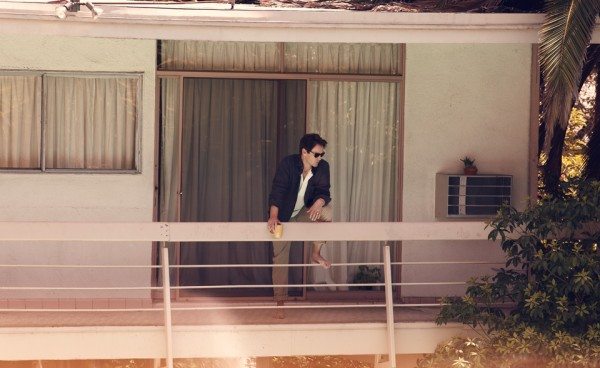 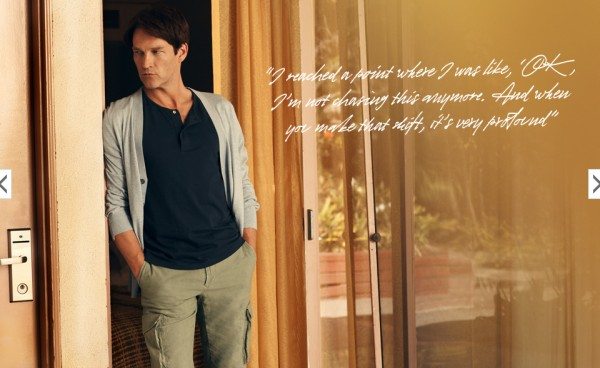 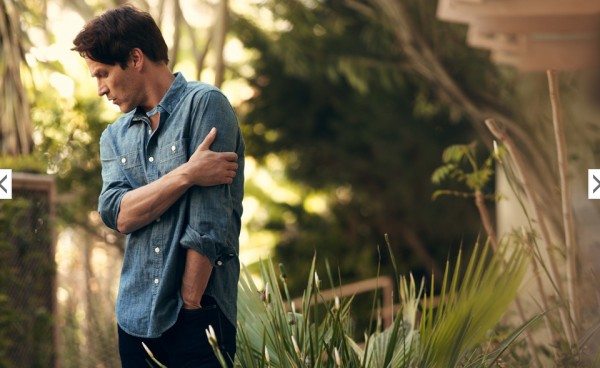 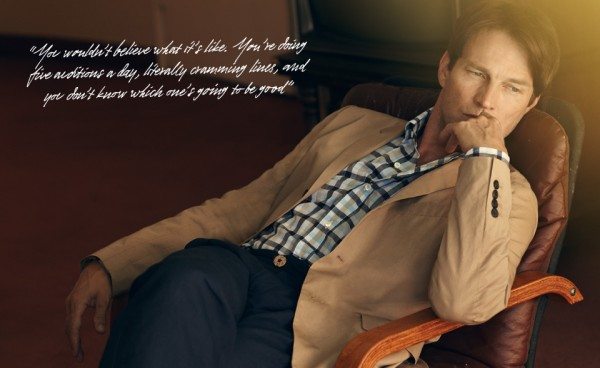