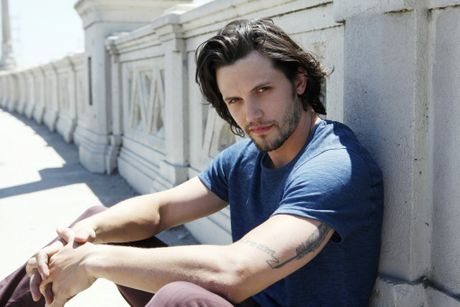 True Blood’s newest hotty vampire, James has been re-cast this season by Nathan Parsons. I’m happy with Nathan in the role based on what I saw in the first episode of Season 7. The scene with James and Lafayette was one of my favorites of the episode and Nathan was very sexy and realistic as the 1970’s draft dodger turned vampire. I noticed that he seemed to have a similar slowness, similar to our sultry vampire, Bill Compton, and I wondered about it.  Now, I’ve got the answer because he was taught by the master himself, Stephen Moyer.

The recent season seven premiere gave viewers a greater insight into James when he opened up to Lafayette about how he became a vampire. From his first day on set, True Blood star and director Stephen Moyer (Vampire Bill) took Parsons under his wing.

He taught me how to be a vampire in this world,” he said.

“Every vampire show has different rules and different ways of doing things.

“It was good to have Stephen there to say ‘okay when your fangs click out this is how I do it, this is what you need to think about’. I got tips on being a vampire from Vampire Bill himself.”

Parsons is best known for his role as Jackson in The Originals, which follows the original vampire family from The Vampire Diaries as they return and settle in New Orleans.

“The Originals has its own mythology which is similar (to True Blood) but different. I play a werewolf on The Originals so I get both sides of the coin, which is really fun,” he said.

His introduction to the complex web of True Blood characters was also made easier by his friendship with Deborah Ann Woll, who plays flame-haired vampire Jessica.

“We went to college together so it was really comfortable to just step in,” he said.

The cast has spent the past seven months filming the show’s final season and Parsons said there was a lot to squeeze into 10 episodes.

“So much happens so quickly it sort of takes your breath away,” he said.

“This is how True Blood works.

“You get on the show and you’re thrust into the blood, sex and violence.”

What do you think of the new James?  Tell us by commenting below.