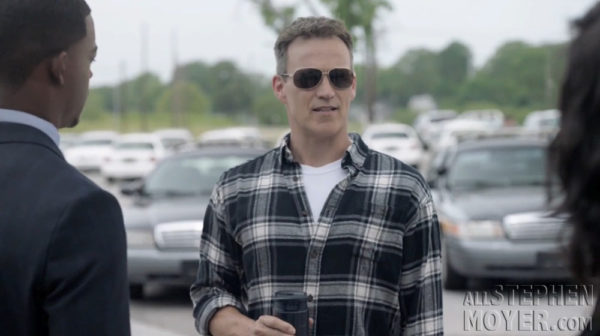 Tonight we saw Season 1 Hour 4 of Shots Fired. I can finally say that this show now has me hooked. So much good stuff happened in tonight’s episode and it had me captivated throughout the hour. It is very apparent that the series intends to reflect what the US is going through these days and I applaud the writers and all the cast for their superb work!

It’s also apparent that Stephen Moyer’s Lt. Calvert Breeland is a pretty complicated character and I can now see why Stephen wanted to play him.

The big scene for Officer Breeland tonight was his conversation with Ashe and Preston.We got a bit of history from Breeland himself when he spoke about his father’s illness with cancer and their estrangement. It was sad to hear him reveal his poor relationship with his dad and how when he died, everyone at the funeral came up and told Calvert that his dad was a wonderful man. You could tell that Calvert never saw that man. I hope to learn more about him in the next episode.

Below are some sample screencaps of Stephen Moyer from the Photo Gallery for Season 1, Hour 4:

Are you excited to see more about how Officer Breeland deals with all the conflict in the police force and the town in future episodes? Let us know your thoughts by commenting below!
Shots Fired