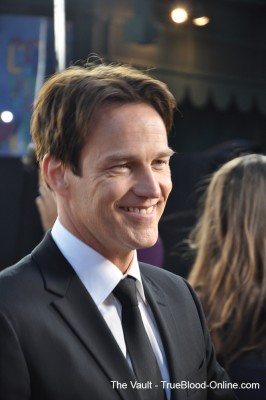 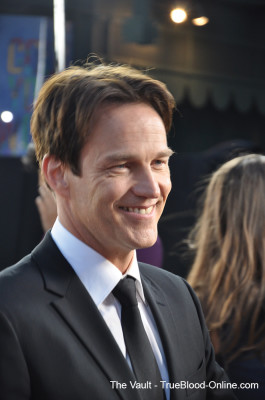 Stephen Moyer is so immersed in the world of “True Blood” that he talks about the characters as if they were family members.

”Bill represents a goodness and a desire to be compassionate that I think people find attractive and desirable,” Moyer said, talking about the undead Civil War veteran he plays. “Eric (Alexander Skarsgard) is a bad boy that ladies and gentlemen will remember.

“However, you wouldn’t want these characters in your life,” he cautioned. “People forget that vampires ultimately act in a selfish way. Poor Sookie (Anna Paquin) has been let down consistently, even by Bill, who tries to do the right thing.”

It’s hard to believe that “True Blood,” which is based on a series of novels by Charlaine Harris, is approaching its final sunrise.

“We were at the cutting edge of the television revolution,” Moyer said with unmistakable pride. “We were there when ‘Breaking Bad’ (2008-2013) and ‘Mad Men’ were starting and, even though we were a genre show, we were talked about in the same way. I have absolutely no regrets giving seven years of my life to this extraordinary thing.

“We were able to create a world so similar to our own, a fantasy world where we wanted to live, yet just odd enough to make it tantalizing and strange. We just didn’t realize how funny it was. That was key. It’s obviously violent, sexy and scary, but the comedy added something.”

Another key was Ball, an Oscar winner for his screenplay for “American Beauty” (1999) who brought his own quirky angle to Harris’ series, including making some changes that could easily have alienated fans of the books. He did, however, stick to the basic idea of a telepathic waitress who lives in fictional Bon Temps, La., a place where vampires and humans coexist thanks to the easy availability of mass-produced synthetic blood.

“Alan is a funny, dark, twisted (rascal),” Moyer said. “I enjoy his company immensely, but mostly I enjoy his very strange mind.“

Among Moyer’s favorite parts of “True Blood” are the flashback scenes.

“I hadn’t known that Bill was a cocktail pianist in the 1920s,” he said. “One day Alan heard me singing and said, ‘We’re going to make Bill do this.’ Someone else wrote Bill as a punk in the 1980s. All those things inform the character I’m playing now.

“One of the joys about long-form television is that it just gets richer and richer.”

As Season 7 begins, Sookie is being forced to reconsider her future, while Bill is discovering that salvation comes at a price. All the characters must deal with a new crisis, and not all will reach the series finale alive.

“We’ve already lost a couple of actors,” Moyer said. “I’m not going to give away who, but it’s incredibly sad to say goodbye.“

Could the series have gone another year?

“We could have done more,” he said thoughtfully, “but I think it’s reaching its natural end.”

Read this entire interview by going to: readingeagle.com