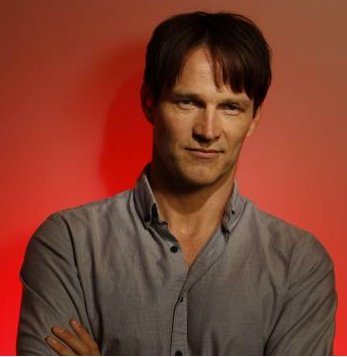 Stephen Moyer talks to USA Today about True Blood season 5. He answers questions about the show and also about directing. Read the article and watch the video below:

“Look, I’ve still got my blood on,” says Stephen Moyer, stretching out his deep crimson nail beds under the glare of midday sun at HBO’s offices. “We all have blood under our fingernails. It was my stupid idea from Season 1, and it never comes off.”

Read the interview with Stephen below:

It’s his last month shooting Season 5 of True Blood, which pulled in more than 5.2 million viewers during Sunday’s premiere. The season opener saw vampires Bill Compton (Moyer) and Eric Northman (Alexander Skarsgard) silvered and dragged to The Authority’s chambers in retribution for killing the governing vampire group’s public spokesperson.
“Bill has had this crazy arc,” says the British actor. “He’s gone from this innocent sort of old-fashioned, slightly enigmatic Heathcliffian … character, to somebody who is revealed as this dark malevolent force who’s been hiding all of this stuff this whole time.”

It’s a politically charged season that — when not luring its visually arresting cast of humans, fairies, vampires, werewolves and shape-shifters into bed — pits vampires who campaign for assimilation against those who believe humans are simply a tantalizing food source.

Former foes Bill and Eric have embarked on a bromance that “sort of turned into Lethal Weapon” on-set between the two real-life friends, says Moyer, laughing. “And so we were sort of told we had to get a little bit more serious. It was like, ‘Don’t forget you’re going to die, all right? There is a stake literally in the middle of your chest.‘ ”

The season marks big firsts for Moyer, as he directs for the first time, joining other stars, including Mad Men’s Jon Hamm and John Slattery, Breaking Bad’s Bryan Cranston and Brothers & Sisters’ Matthew Rhys, who have stepped behind the camera for their own series.

The actor began lobbying creator Alan Ball for a shot at directing during Season 1.

After Moyer shadowed True Blood directors last year, Ball decided the actor was ready. “It’s a very strong episode,” says Ball. “He directed a sex scene that might be the hottest sex scene we’ve ever had on the show.”

“I didn’t get the easiest of episodes,” concedes Moyer, who was charged with Episode 8, which involves complicated flashbacks. “I was terrified — not of being able to do the job, but I was scared of how the other actors would react to me telling them what to do.” But “they were so supportive. It is a giant family, and there were times when I knew they had my back.”

Of course, “I got a bit of sass from the wife,” he says with a grin. “She was like, ‘Oh, my God, this director is such a diva.‘ ” (The show has shot around her pregnancy.) Moyer teared up when Paquin gave him a book full of stills from his episode, signed by the cast and crew.

Anna and Stephen co-produced their own art-house film “Free Ride” (Paquin stars), which will hit the festival circuit this year.

This week, the cast will do their final table read with Ball before he exits as show-runner (he will stay on as executive producer).

Moyer smiles, predicting an emotional day. “When I started this job, I didn’t know it was going to lead to five, six years of working here, or living here or meeting a wife and leading to babies. So Alan has got a lot to answer for.”