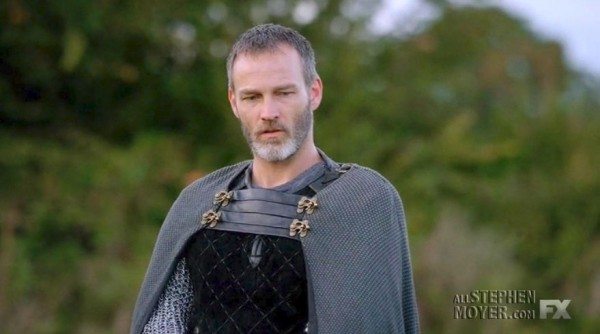 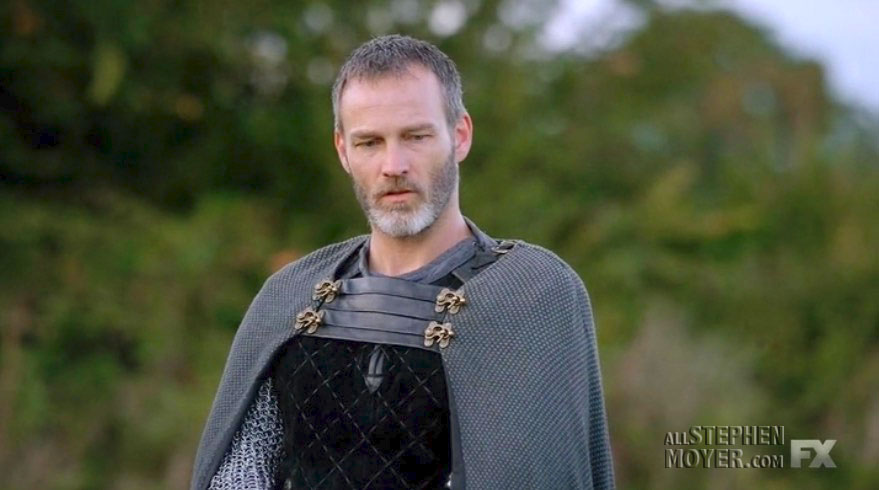 Below is an interview with Stephen about The Bastard Executioner and his part of Milus and much more. This interview was conducted at FX’ Networks party for the Television Critics Association summer press tour at the Beverly Hilton Hotel by Abbie Bernstein last July.

In FX’s THE BASTARD EXECUTIONER, we’re in 14th-century Wales, where soldier-turned freedom fighter-turned executioner Wilkin Brattle (Lee Jones) is caught up in political intrigue. One of the chief engineers of the political chess-playing is Chamberlain Milus Corbett, played by Stephen Moyer.

AX: How did you become involved with THE BASTARD EXECUTIONER?
STEPHEN MOYER: I was looking to do all sorts of other things, and then Kurt came to me with this and I was sort of fascinated by the world that he was building, and it was so different from what’s going on here [in Los Angeles].

AX: Did you have an interest in this period of history?
MOYER: I studied King John through to 1485, Richard the Third. That was my period. So I feel really lucky, because I know this period pretty well. I’m not a huge history buff, but I’ve done and I’ve always been attracted to classical works, so I’ve done a lot of theatre, I’ve done a lot of Shakespeare. That’s something I like to explore and this kind of is a chance to go into it.

AX: How is it dealing with the show’s particular style of dialogue?
MOYER: [laughs] Jesus Christ, it’s hard to learn. But I love the turn of phrase, it’s steeped in history, he’s done his research and yet it’s not medieval talk. It’s like a bridge between modern and then. Because he doesn’t want it to sound like Chaucer, and he also doesn’t want us to sound like characters from SONS. So I think he’s done a really good job of that marriage.

AX: How is it for you coming into sort of a family business, because your executive producer/show runner/series creator Kurt Sutter and Katey Sagal, who plays the pagan mystic Annora, and executive producer/director Paris Barclay have all been working together for years already on SONS OF ANARCHY?
MOYER: They’re amazing. Me and Katey get on really well. And Paris is just a gem. I mean, he’s just such a beautiful energy to be around. And then Kurt is this amazing creative force. He’s incredible. And they’re so successful already, it’s just lovely to be in that orbit, to be honest.

AX: Are you glad to be playing somebody who’s not terminally depressed as opposed to, say, Bill?
MOYER: Yes, I’m having a lot more fun being naughty.

AX: What’s the relationship like between Milus and Wilkin? Is Milus mentoring Wilkin because Milus thinks if Wilkin gets a leg up, that’ll help him, or is Milus trying to prevent Wilkin from taking away something Milus has?
MOYER: I think that it’s a bit of both. I think that [Milus] sees in [Wilkin] a sort of drive and a purpose and a self-belief and a higher calling that he is going to latch onto, but he also has latched onto him because he knows that he’s got something over him that he could always have. And therefore it has a duality for him.

AX: What is your character Milus ultimately hoping for? Do we know his endgame? Do you know?
MOYER: I do not know his endgame. I think that we know he’s going to try and do everything he can for himself in order just to keep him in the manner to which he’s become accustomed.

AX: Where do you shoot in Wales?
MOYER: We’re in Bridge End, very near Cardiff. We are in some studios that were built about ten years ago, which have their very own little village, and we’ve taken it over. We used a castle called St. Donat’s, we used a castle called Caerphilly Castle, we’ve also used Cardiff Castle, but we have built a castle as well. We’ve got an exterior of the castle, and we’ve gotten all interiors. I get a few days off every now and again, and I get to go and walk the coastal parts and see castles and go to beaches. It’s beautiful.

AX: Reportedly, Kurt Sutter was going to do the story in England, and then got inspired by the Welsh locations …
MOYER: Absolutely. He had originally placed this story in England, and there were a lot of advantages to going to certain places within England, there are good tax incentives there now to shoot in England, so he went to England, was shown some of the locations in Wales and kind of fell in love with what Wales had to offer and so re-planted the story into a Welsh story. It absolutely works. What’s beautiful as well is that– Caerphilly Castle was completed in something like 1156, St. Donat’s was 1180 or something like that, so we are shooting in castles that our characters would have existed in. It’s extraordinary, isn’t it?

AX: There’s a mixture of original characters and historical characters in BASTARD EXECUTIONER …
MOYER: Yeah. There are some characters who are iconic historical figures. And I love that. One of the things I wanted to do with TRUE BLOOD was, we got to do all of those fantastic flashbacks. So I’d be going, I’d say to Alan [Ball, the series creator], “Wouldn’t it be great if we do Bill’s on the Titanic in 1913?” And Alan was far more interested in, “Bill missed the Titanic. So he’s on another boat.” Everybody just misses those big pieces of history. Because when you look at history, you think of, “In 1340, this happened,” or, “In 1120, this happened.” But there was shitloads of other stuff going on as well.

AX: Some of your earlier roles have called for a lot of sword-fighting and horseback-riding. Are you enjoying getting back to that?
MOYER: I’ve done a lot of, and I love it, so yeah, that aspect of it is just a cherry on the gravy.

AX: Does Milus as a character like doing his own fighting when he gets the chance, or would he always rather have somebody else do it for him?
MOYER: Good question. I think that if he can get people to do it, it’s much easier than having to do it yourself, but ultimately, if it means that he’s going to have to finish the job, he will.

AX: On the brutality scale, where does THE BASTARD EXECUTIONER hit?
MOYER: There are a couple of very dark little things that happen and it’s pretty brutal. I have to say, it was so brutal and so vile – and we shot it – that they’ve actually had to pull back, because FX thought it was too much.

AX: Are you going to do any episode directing on BASTARD EXECUTIONER? Have they talked with you about that?
MOYER: No, but they know that I do [direct]. I’m in it a lot, and as we found on TRUE BLOOD, one of the problems is, not the directing part – the directing part’s fine – it’s the prep. Because the prepping director needs a week to ten days of getting everything in place for when he starts directing, and if you’re filming [as an actor] during that period – you know, Bryan Cranston always used to shoot the first episodes [of a season of] of BREAKING BAD, because that way, he didn’t have to be on set [during his preparation period]. So if they’d let me do that, I would love that, but at the moment, I’m not asking for it. I love directing, but at the moment, it hasn’t been mentioned.

AX: A TRUE BLOOD question – how would you have liked to see it end?
MOYER: I think it’s incredibly difficult to end a show and there’s absolutely no way that you’re going to be able to please everybody. My personal take on it – I feel like, for me, I would have liked not for Sookie to necessarily end up with somebody. I liked the idea of Eric always being in the background there somewhere, and that if Bill’s going to die, that she’s always being watched over somehow. That was something that I think might have been interesting – but it’s not for me to say, I’m not the writer.

AX: How is your film producing going?
MOYER: Great. Lots, lots, lots happening. But obviously, I’m in Wales. I’m hopefully going to be doing something in the new year in that regard.
I’m really excited to see this modern storytelling, this golden age of television, that we’re all in, but it’s modern film making techniques brought into medieval times and I think it’s beautifully shot, really wonderfully written and really, there are excellent actors in our show and I think it’s going to be a really dark ride.