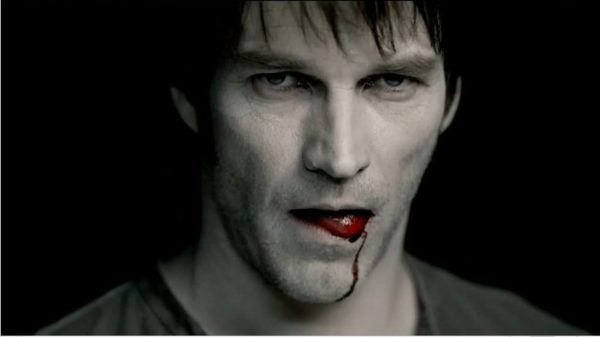 Below is an article on NYMag.com by Emma Rosenblum which talks about True Blood and our favorite vampire, Bill Compton, played by Stephen Moyer.  Stephen talks about biting Sookie’s neck.

There’s a scene in the new season premiere of True Blood in which Bill, the brooding village vampire, beds Sookie, his mortal girlfriend, after they’ve had an argument. It’s steamy stuff—makeup sex is still makeup sex, even when one party isn’t technically living. Mid-act, Bill bites Sookie’s neck with his fangs in an orgasmic frenzy, then kisses her, smearing her own red blood down her cheeks and onto her lips. Stephen Moyer, the actor who plays Bill, has the difficult job of portraying both a savage bloodsucker and a likable romantic lead, and this interlude, at least, comes off as hot as it does scary.

“I had an e-mail from a lady after Bill bit Sookie for the first time saying, ‘It was all going so well—why did you have to bite her?’ ” says Moyer, when I ask him about handling those two aspects of the role. “I explained to her that it was actually a consummation of their relationship as opposed to a violation. He wouldn’t do that for just anyone.” True Blood, which starts season two this week, is fundamentally a love story between two outsiders. Sookie Stackhouse, played by Anna Paquin, is an otherworldly waitress who can read people’s thoughts (except for Bill’s), and Bill Compton is a 173-year-old Civil War veteran who also happens to be a vampire. “However weird our show is, it’s ultimately about relationships,” says Moyer, who’s on location in Louisiana, where True Blood is set. Created by Six Feet Under’s Alan Ball, who adapted it from Charlaine Harris’s books, True Blood in its first season introduced viewers to a world where vampires live openly but are treated like second-class citizens, even those who, like Bill, want to co-exist with humans. “I play this vampire hero who’s trying to be decent and do decent things,” says Moyer. “And he loves Sookie so much that sometimes he goes too far for her.” Ball notes that he “expertly walks the line between monstrous, noble, and vulnerable. He’s wildly romantic and appealing, and I am not at all surprised by the rabid intensity of Bill love from the fans.”

Moyer, a 37-year-old Brit who has toured with the Royal Shakespeare Company, peppers his speech with “darling” and “love,” and sounds nothing like Bill, whose Nawlins accent spawned the catchphrase “Sookie Stackhouse, you are maaahn!” (If you’re a fan of the show, you’ve tried to repeat it, unsuccessfully.) When I point this out, Moyer immediately switches into “Bill.” “When I’m in my voice and I say ‘Soo-kie,’ that’s just how it comes out,” he drawls creepily, pronouncing Sookie to rhyme with cookie (as opposed to kooky). “Everything moves slowly in Louisiana, including the way they talk,” he says. “The voice has really taken on a life of its own. There’s a parody of it on FunnyorDie.com called Vampire Bill’s Cooking Show, in which they make Bloody Marys.”

Adding to the show’s romantic fantasy is the fact that Moyer and Paquin have become an offscreen couple too, though with (presumably) less biting going on. “In the casting process, they read us together, so our chemistry’s not a coincidence,” says Paquin. “The two characters have to lock eyes and go, ‘Oooh, who are you?’ ” she says. Moyer insists that “we tried to stay professional for as long we could. But it was unstoppable.” The couple tried to keep their relationship out of the press until the first season aired, “because I didn’t want the publicity to be about us as a couple. But now it’s fantastic—not only do we live together, we see each other every day,” he says. That Bill and Sookie’s connection continues into real life seems a natural progression; the show hinges on the fact that these two are meant to be, in some cosmic way. “I hope people feel like it adds to the show instead of taking something away,” says Moyer. “Our relationship has grown in front of the crew, in front of everyone, really. To be honest, it’d be weird if I were with somebody else.”