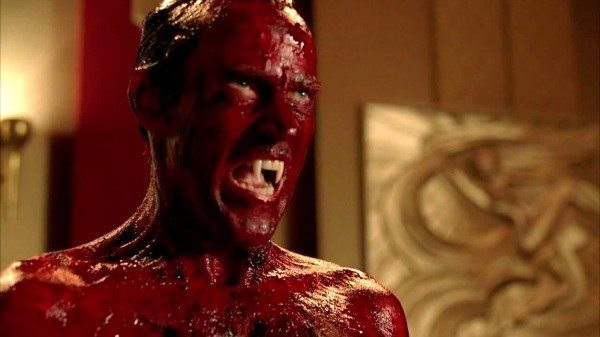 It’s hard to believe that there could be a bigger blood bath than we saw at the end of True Blood’s Season 5 when Bill burst into a blood pool to be resurrected as Billith, but the final Season 7 of the show just might top it.

We all know that Stephen Moyer has had some of THE TOUGHEST scenes in True Blood’s past 6 seasons and its no surprise to us that he has nailed every one. We remember that this is the man who taught us all to “embrace the fear” after all.

Stephen, as Bill Compton, was asked to shoot scenes such as the twisting head sex scene with his maker Lorena, to turn into a blood pool becoming Billith, burning to a crisp when going into the sun to save Sookie  and endure Lorena’s torture, just to mention a few.

This is also the man who flipped his car while racing at the Toyota Pro Celebrity Race and lived to tell the tale yet still won the money for charity. Stephen always seems to search out the most challenging roles and scenes to play.

And, remember, this is also the man who can do also do Broadway musicals and Shakespeare, brilliantly. I doubt he would ever turn down an opportunity to “show his courage,” if the part was right. Is there nothing he cannot do?  I don’t think so. He makes us proud to be his fans! 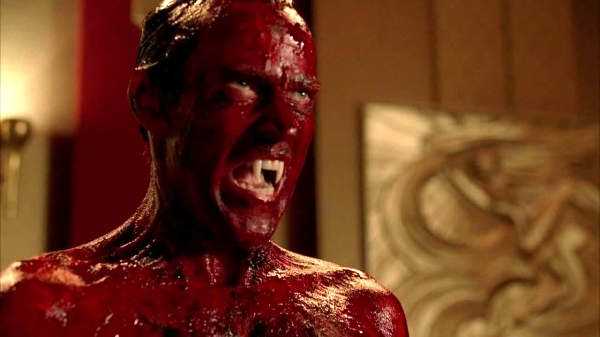 Below is a story from TV Guide about this most recent “soon to be infamous Bill Compton scene”  where they tell a story about the biggest blood spew ever:

At 3am on the Los Angeles set, no one’s in mourning quite yet. In fact, Stephen Moyer is doing a happy dance after nailing a particularly tough scene.

Yep, Bill Compton, the deadly and smolderingly seductive Civil War bloodsucker who walked into a bar in backwater Bon Temps, Louisiana, and rocked waitress Sookie Stackhouse’s (Anna Paquin) world, is coolly tapping out some impromptu soft-shoe — and cracking up the crew.

Bill has just slain a greedy human and a menacing vamp in short order, a scene so gory it required the biggest blood-spew in the series’ special-effects repertoire: the “Bellagio,” cheekily named after the famous dancing fountains in Las Vegas. And it looks as if things will get even messier for Bill in Season 7 — both physically and emotionally.

“In the final season, we’re telling a more personal story,” says executive producer Brian Buckner, who took over after show creator Alan Ball and executive producer Mark Hudis left. “We’re going back to the original promise of the show: Bill and Sookie. People are going to be very surprised about the way we get there. There’s romance, sadness and resolution.”

There’s also Hep-V. The deadly virus is spreading, and hordes of starving, zombielike vamps are staggering toward Bon Temps. “Fans can expect a bloody barbecue with consequences in the season premiere,” teases Buckner. “Nobody’s safe.”

The sudden spike in the local mortality rate leaves the survivors fighting to save their town. “The stakes are the highest they’ve ever been,” says Paquin, who’s married to Moyer. “Sookie gets into situations she’s going to need help getting out of.“

In the Season 6 finale, it looked as though she would never again see Bill as a savior. He and shape-shifting Bon Temps mayor Sam Merlotte (Sam Trammell) devised a plan to pair up uninfected vamps with healthy humans in a symbiotic relationship for survival. But when Bill offered to be Sookie’s plus-one, she opted out and fell back into the arms of reliable, rock-solid werewolf Alcide Herveaux (Joe Manganiello).

“No matter where Sookie was, Alcide came running. That’s just the kind of guy he is,” Manganiello says. “He’s a good, solid choice. But nobody stays happy for long in Bon Temps.” Despite all the danger, there’s no shortage of hot sex scenes this season. “There’s a profound lack of clothing,” says Buckner.

I particularly cannot wait to see this scene and to see Stephen Moyer outdo himself again as the amazing Bill Compton.  I still think he deserves an Emmy for the part he has played in the show.

The Summer Preview issue of TV Guide Magazine, on newsstands Thursday, May 29.