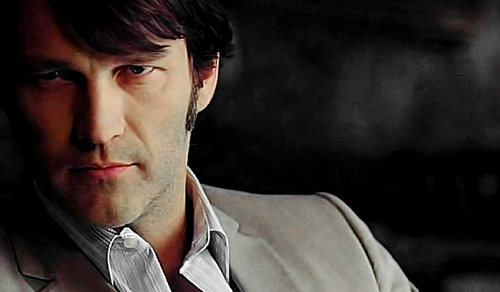 On the HBO television series True Blood, already renewed for a second season, Stephen Moyer plays Bill Compton, the 173-year-old vampire who takes a special interest in a local waitress, named Sookie Stackhouse (played by Academy Award winner Anna Paquin). Having seen more than his share of cruelty and violence, Bill has returned to his family home in Bon Temps, Louisiana, hoping to reconnect with whatever humanity he’s managed to retain over the years. He never expected his attempt at mainstreaming to include an attraction to a human girl.

Moyer, previously known for his role as Debra Messing’s love interest in the hit series The Starter Wife, splits his time between Los Angeles, where True Blood films, and his native England. The 37-year-old recently spoke to MediaBlvd Magazine about what it’s like to play a vampire and talk with fangs.

MediaBlvd Magazine> How did you get this job? Was it just a normal audition that your agent sent you to?

Stephen Moyer> I had come back from Australia, where I had been doing The Starter Wife, and, at the time, I was tan and blonde. I’d been away for a long time, and I wanted to be back in London. I’ve got kids at home, and I wanted to be with my kids. And so, I turned down a few scripts. I didn’t want to come to America, straight away. But then, I saw True Blood and I found out it was being done by Alan Ball. I read it and, the next day, I put myself on tape. They’d had trouble finding Bill. They’d been looking for about five months. It was March, and I put myself on tape the next morning. They emailed it to America, Alan saw it that afternoon, and I flew out the next morning. When Anna and I met, I was tan and blonde, and she was white with black hair. We’ve reversed roles completely.

MediaBlvd> Had you been familiar with the books?

Stephen> I hadn’t heard of them, ever before. But, as soon as I got the job, I started doing the research and reading the books. My character is from the American Civil War, so I went back to the Civil War and started reading about that.

MediaBlvd> Were you a fan of the vampire genre before this?

Stephen> It’s not the genre that I would have jumped at, to be honest. I’d read Anne Rice, but that was about it. I did play a vampire in ‘98, in a series called Ultraviolet. I have these sharp canines, so in that show, we decided not to even give me vampire teeth. But, for this, we have different teeth. It’s not my jump-to genre, but I read the first book and I could totally understand what Alan saw in it. Sookie is amazing, Bill is a fantastic character, and the world that Charlaine Harris sets up is just unbelievable.

Stephen> My jump-to genre is modern fiction, really — from Steinbeck, and all of those, until now.

MediaBlvd> Did you do much vampire research, like watching movies or reading books?

Stephen> No. I read the book this was adapted from. Bill is such a complex character and he’s so unlike any other vampire because he’s got morals. He’s a very ethical man and he wants to be a decent undead being. I think that’s a fantastic thing, and so, I didn’t feel like I needed to do research. I wanted to make him precise, still, slow and different from how you would ordinarily perceive a vampire.

MediaBlvd> What is it like to wear the fangs?

Stephen> As a kid, I had to wear a retainer to push my teeth straight, and it’s kind of like having a retainer. You have to learn to talk with them in. There was this hilarious thing, in episode three or four, where there are four vampires, all sitting around, chatting, and then we all have to have our teeth in, so everybody reaches down and sticks their teeth in and they start talking funny, and it really wasn’t very cool at all. It’s quite difficult, but we’ve all gotten much, much better at talking with them in. And, we’ve reduced the back plate on the teeth a little bit, so people have gotten better at talking with them in.

MediaBlvd> Is there a lot of looping involved?

MediaBlvd> Did you have any pre-conceptions of what it would be like to work with Alan Ball or Anna Paquin?

Stephen> I didn’t have any preconceptions. But, one of the great things was that, on that first day that we met, when the two of us sat down with Alan, it was extraordinary. There was this link. There was an amazing, conjoining thing between the three of us, and I think he’s an extraordinary genius.

MediaBlvd> Can you talk about working with Alexander Skarsgard, and what the relationship between Bill and Eric is?

Stephen> The relationship is one of respect, but mutual dislike. His character is 1,000 years old and my character is 170 years old, and in our story, the older you are, the stronger you are, so Eric is very strong. Even though Bill can stand up to Eric and fight him, he ultimately has to cow-tow to what Eric wants him to do, apart from in one respect, which is very important. When a vampire has a partner, another vampire is not allowed to encroach on that turf. So, as much as Eric might like to, he can’t because it’s against vampire law. That, of course, is a great lure to Eric and he wants to fight that.

MediaBlvd> Are you going to be doing any flashbacks through Bill’s life?

Stephen> Yes, we go back to the American Civil War. It’s in the books, so I’m not revealing anything, but we go back to Bill, when he was turned. About 140 years ago, in 1862, he went off to fight in the American Civil War and, three years later, he came back and that’s when his life changed. He had a family and a wife, and we see him revisit that in his mind. And, that was a beautiful thing to do. It was very moving. It was amazing for me, doing the research into that period of time. I didn’t really know that much about it. It’s obviously not something that’s taught in British schools. So, for me, coming here, it was great to use that as a reason to go and do research.

MediaBlvd> Will you be doing more flashbacks, to show other time periods?

Stephen> Not in the first season, but it’s something that we’re talking about.

MediaBlvd> Do you know what Bill’s backstory is, from the time he became a vampire?

Stephen> I’ve got ideas. I know that the character who turns him is somebody that he’s attached to. In our world, when your turned from a human into a vampire, the person who turns you has power over you. You’re linked to them and they’re linked to you. There’s nothing you can do about it. I know that my history totally goes with that character, all the way through until just recently, when I broke away from her.

MediaBlvd> How hard was it to learn the Louisiana accent?

MediaBlvd> What do you make of the relationship between Bill and Sookie?

Stephen> She’s naive, yet she’s spunky. She’s courageous. She’s so open-minded. She’s intelligent. She’s funny. There is something about her that is different from everybody else that he’s ever met. That’s why he likes her. He can’t work out what it is that’s different about her, and he’s just compelled by her otherness.

Stephen> I’ll say no to that because I think that their sex is based in love, as opposed to sexual desire. There’s a very different line between their love-making and the other love-making in the show, which is more about sex. Bill is not just about sex and blood.

MediaBlvd> Are you comfortable with those kinds of scenes?

Stephen> I’ve always rather liked doing sex scenes. I don’t understand what all the fuss is about.

MediaBlvd> Are you going to be returning to The Starter Wife this season?

Stephen> I couldn’t do it because of True Blood. It was going to be a possibility, at one point, and then this clashed and there was no way that we could make it work. But, Debra Messing and I had a fantastic working relationship. She’s brilliant, and I really hope the show goes fantastically for them. I would have loved to have been a part of it, but I couldn’t.