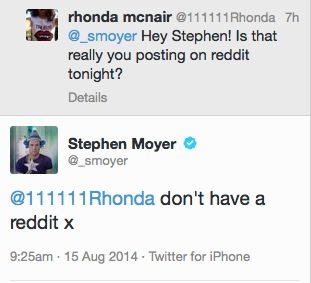 Now that Stephen is personally active on Facebook and Twitter and it has become impossible to set up fake accounts there in his name, an impostor has moved his fraudulent activity to Reddit.

We were just made aware of the fake _smoyer account on Reddit by loyal Stephen fan Rhonda who tweeted about it to Steve and received an answer.

Stephen Moyer is NOT on Reddit, folks, don’t let this impostor fool you!