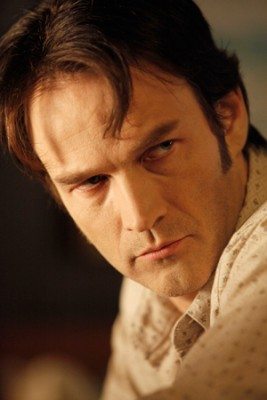 “Everybody wants a piece of Sookie,” Stephen Moyer tells Zap2it. “And you know Bill is super protective. And, with all love he is a bit paranoid as well. I think Bill feels that the world is closing in and trying to take away the one thing that he loves.“

SPOILER ALERT – read the interview below: 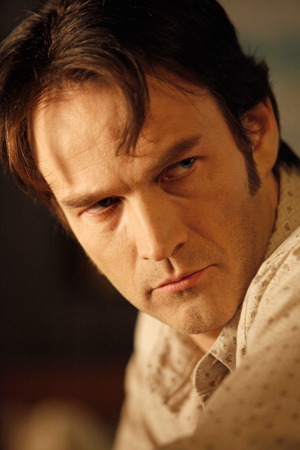 We hear Lorena is coming back. Could she have kidnapped you?
I think if I was looking from the outside and I wondered who would be a good candidate, she would certainly be up there. She’s a conniving b****. [Laughs]

And she can’t take a message very well, can she?
Oh my God, how many times do you have to tell her! [Laughs]

Will we know who kidnapped Bill in the premiere episode?
What’s extraordinary about the first episode is that before the title sequence we see seven different storylines, I believe, and it’s amazing. It is amazing how well constructed it is. And I’ve only seen the first couple, but you will find out in the first episode what has happened. And it is all interwoven into the fabric of the episode. It’s beautifully done.

It seems that Bon Temps is going to be filled with supernaturals this season.
It’s nuts. I keep saying we’ve got a cast bigger than “Ben Hur,” that it is now like “Ben Hur” and “Gladiator” put together. It’s unbelievable. We’ve got some wonderful new faces, not least Joe Manganiello who plays Alcide, who’s wonderful, great bloke, we got him fresh after James Frain [who plays new vamp Franklin Mott] comes in, who’s a fantastic actor who I knew before. And what’s extraordinary about our show is the strengths and depths. And the story builds as well between Terry [Todd Lowe] and Arlene [Carrie Preston], who are, like I’ve said many times, my favorite characters. And also Chris Bauer, who plays Andy Bellefleure. Everybody’s story lines ramp up and ah, it’s really wonderful. Also Sam’s [Sam Trammell] shapeshifter side gets revealed in a sort of interesting way as well, so it’s all sorts of madness.

As you’ve said, Bill is fiercely protective of Sookie, his love. How does he respond to the many threats on his relationship?
I think what’s interesting is Bill still feels like an old soul. You know, he feels like someone who is stuck in his past. And he is a relatively new vampire when compared to someone like Eric or Godric or the King of Mississippi, who comes in this season, the amazing Denis O’Hare. He is relatively new and I think that is one of the reasons he has that aspect of his character. In his sort of gentlemanly Southern way. And maybe a lot of the stuff that happens this year will help him re-address the way that he views the world and the way he holds on to it. I think that is a really interesting dynamic for me to play and also for Bill fans to get their heads around.

What is the threat to Bill’s character in Season 3 from Eric?
I think that the big question really is, we all know that there is something special about Sookie. And I think that’s what is it about her that is so compelling. I think that Bill feels that Eric has ulterior motives, and he isn’t interested in her because he’s attracted to her in the same way that Bill is. And I think Bill’s fear is that he is trying to use her. And so I think Bill is terrified that he’ll lose her to someone that does not care about her. So, Eric is going to be coming in and trying to work his magic with the southern belle, and there is nothing that Bill can do about it. You know, if you look at it in terms that Bill is 173 and Eric is 1,000 years old, what is an interesting dynamic is Bill is kind of stuck in terms of what he physically can do to stop him because of Eric’s strength.

Does Bill know what Sookie is?
I think that he has a rough sense of what she is, but he doesn’t know fully. And I don’t think anyone knows fully. And I think that Bill is trying to find out as much as he can about Sookie before anyone else does so he can protect her.

In reality, you look and sound very different from Bill. What are the challenges to playing Bill?
Bill speaks in a very different voice than the way I do and that always kind of — it kind of feels like it is part of me now, to be honest. You know, there is a stillness about Bill, there is a way he stands and a way he is that is different than the way I am. His voice is slightly richer and deeper than mine, and those things are just becoming part of me now and I just sort of slip in, as we all do. You know Alex does it too. And certainly Nelsan [Ellis] as Lafayette. Um, sort of, he becomes his character before your eyes and you know, and Nelsan is a great example of someone who really is not like his character, but he just slips in to that costume and that physicality more and more easily as the season goes on.

What is your favorite scene in Season 3?
There is an emotional scene with one of the actresses on the show. I don’t want to give it away because it really is a plot turner, you know? But there is a scene which is just — I mean, I think it will be talked about for years and years to come. And the amount of detail that goes in to preparing something like that, the amount of people it takes, I mean, we are talking about in the twenties, to create, to make a scene like that happen on our show, it is just extraordinary. And um, I mean I just consider myself a small part of it, to be honest. And it is a joy. I mean, every time they put together a new edit of how, of stuff that you are looking at off the season, we keep going, f****** now look at it! It is amazing to just see it develop and then you know, take shape in front of your very eyes.

We can tell you’re really appreciative of the production elements in the show. Do you have any desire to direct an episode?
I’ve always wanted to do that. Who knows if it will ever happen. I’m certainly planning on doing that in the future myself. You know, it’s such a big show, it is probably one of the most complex shows in terms of scope. I don’t think anything has been more audacious than our show and they are like mini-movies to shoot and very, very complex for the directors. And it is HBO’s baby. So who knows if I will ever be able to do one of these. I sure hope so, but we’ll see. I’m sure we would all like to get our hands on it at some point. So, you know, we’ll see.