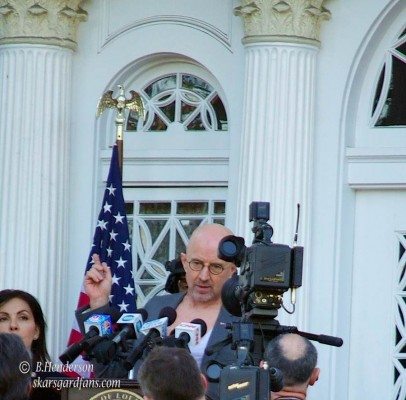 Our friend, Barbara of skarsgardfans.com has been going to the True Blood sets recently photographing lots of pictures of Stephen Moyer and more goodies for the fans and she has been kind enough to share them with us. This week the filming is of the Governor of Louisiana mansion and Stephen Moyer was there doing some directing, presumably finishing up on Episode 1, even though they have begun episode 2 filming. Many times its more efficient to be filming two episodes simultaneously since often the same sets are used, etc.

True Blood filmed for season six on location at the home shown below. Our speculations were correct that yes this is the home being used for “The Governor” of Louisiana. Here is Arliss Howard rehearsing the scene (I can almost quote the speech he gives word for word! Heard him repeat it many times for each practice and quite a few takes for the filming). His character is not a big fan of vampires. It will be interesting to see just what his role will be next season.

And, here are photos of Stephen filming: