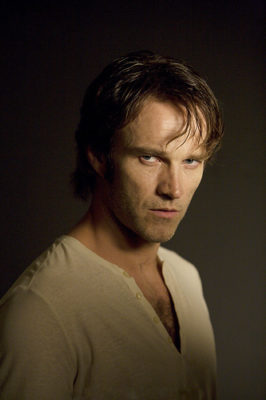 Article on The Star Online By ELIZABETH TAI (Malaysia)

It’s finally here: a chance for Malaysian fanpires to sink their teeth into True Blood.

“I love playing him,” says Moyer in an interview transcript provided by MAX (formerly Cinemax), HBO’s sister channel. “Bill is this tortured soul who is, in fact, trying to be a decent man and trying to hold on to morality of humans when, in fact, he’s immortal.” (Interestingly, Bill Compton is not Moyer’s first vampire role; he also played a bloodsucker in a 1998 British series, Ultraviolet.)

In True Blood’s world, vampires have “come out of the coffin” to be responsible members of society. This is tough on human folk; they are keenly aware that they are vampire food (although vampires now have synthetic alternatives) and are suspicious and fearful of their new neighbours. Vampires, on the other hand, have fallen from being predators at the top of the food chain to being a disdained minority; not all bloodsuckers enjoy this power shift.

Yet, Bill, a 173-year-old vampire, decides to build a life for himself in a small Southern town called Bon Temps. He ruffles more than a few feathers in the vampire-free town – especially when he sets his eyes on one of the residents, Sookie Stackhouse.

“It’s a parallel world, like our world, but one where vampires exist,” notes Moyer. “And you have to buy into that straight away and you have to believe it’s real. And when you have someone like Alan creating this world, you do,” Moyer says, referring to the show creator Alan Ball.

Bill is also a metaphor for discrimination, Moyer points out.

“Bill represents minorities and taboos like addiction, sexuality, racism – whatever metaphor you want to bring to the table,” he says.

And Moyer enjoyed the opportunity of playing a character that is considered a pariah: Humans fear him and his fanged peers look down on him because he is “mainstreaming” (trying to fit into human society).

“I was fascinated by that because it makes him the ultimate outsider. It’s a fantastic role,” he enthuses.

And to think that Moyer nearly didn’t become Bill!

By the time Moyer, 37, born and raised in Brentwood, England, started work in the United States, he had already established himself a decent resume.

After studying at The London Academy of Music and Dramatic Art and forming his own theatre group, The Reject Group, Moyer appeared in popular British series like Midsummer Murders, Peak Practice and Cold Feet, and in Hollywood thriller 88 Minutes with Al Pacino.

But it was his role in the 2007 US series The Starter Wife that made viewers and casting agents sit up. As Sam, he was the perfect dreamboat for Debra Messing’s lead character, a spoiled L.A. socialite. Rugged, attractive with a mysterious past to boot, Sam made hearts flutter.

He was on the verge of breaking out in Hollywood. And he thought he would when he was lined up to play a character “who was a bit like the new Jack Bauer (24)”. But plans for the show fell through.

“I came back to London and said to myself, ‘I’m not doing that again.’ It was just so upsetting and frustrating and that had happened to me before. I actually said to my manager, ‘I’m not coming back,’” he says.

But something came out of the role that never happened. His casting tape from the show attracted attention and his manager began getting scripts “right, left and centre”.

“She wanted me to go back to the States again, and I said there was no way. Eventually she said, ‘Look, I know you haven’t read any of the other scripts, but there’s one I really think you should read. Please, just read this one….’”

The script turned out to be Ball’s True Blood, which he adapted from Charlaine Harris’ Sookie Stackhouse series of novels.

“I couldn’t believe it; it was amazing,” says Moyer. So amazing that he put himself on tape and sent it off to Ball.

Fourteen hours later, Moyer sat in front of Ball, reading the part of Bill with Canadian actress Anna Paquin (The Piano, X-Men movies). Ball, apparently, had been looking for someone to fill Bill Compton’s shoes for months.

“One minute I was sitting in London reading a fantastic script for True Blood and two days later I was in Los Angeles reading for the show’s creator, and being told I’d got the part,” he says. “It was incredible. And yes, it has changed my life completely.”

At the centre of True Blood is the romance between Bill and Sookie Stackhouse, a blonde telepathic waitress played by 26-year-old Paquin.

“All of Sookie’s life she has been seen as different and he is attracted to the fact that she’s different. And she’s not scared of him – she’s totally open to him and she’s fascinated by him and kind of enthralled. And he, in turn, is taken with that openness. It’s something that he’s never had before, with a vampire lover or a human lover,” says Moyer.

And the actor is just as fond of the actress who plays Sookie.

“From the very first moment I met her, the moment we sat together on the sofa doing a scene for Alan, I knew we’d get along brilliantly,” he reveals.

So brilliantly, in fact, that True Blood is becoming true life – Moyer and Paquin started dating after the auditions, but kept it a secret. But it was Hollywood’s worst-kept secret: the duo had to dodge queries about them being an item last year as rumours of a romance swirled around them.

“We are together,” Moyer finally confirmed in a February interview with the US magazine TV Guide. “We didn’t want to take anything away from the show,” said Moyer about all that secrecy. “The show is the star, not the two people having a relationship.”

Currently filming the second season of True Blood, Moyer now jets between Los Angeles (where True Blood films) and Britain, where his children Billy and Lilac live with their mother in London. (Moyer separated from her in 2006.)

As Bill Compton, Moyer has morphed his clipped British accent into a romantic, genteel twang that would have been perfectly at home in Gone with the Wind. And he also had to get used to wearing “the sock”, a nifty piece of clothing that is used to, uh, cover his bits during sex scenes. But steamy scenes – neatly excised from the Malaysian version, of course – are not a problem for Moyer.

“I’ve always rather liked doing sex scenes. I don’t understand what the fuss is all about,” he told entertainment rag MediaBlvd Magazine.

The fangs, however, take getting used to.

“I’ve got three sets and they’re very sharp and they go on to the eyeteeth as opposed to the canines – and I actually have quite pronounced canines,” says Moyer.

“They take some getting used to, I can tell you. And there were times, especially early on when we were still getting used to them, when the guys playing vampires would sit around in between takes and we’d be talking about football and they’d say, ‘Okay, campera’s rolling, everyone put your teeth in….’”

However, to get vampires to extend their fangs takes some nifty CGI work.

“We shoot it twice – we shoot it leading up to the moment when the teeth appear; they CGI that moment, but apart from that, it’s all real!” he says with a laugh.