On 5 August 2009, it was confirmed that Stephen had become engaged to Anna Paquin. Although, kept a secret at the time, they have been dating since filming the series’ pilot in 2007 (Stephen and Anna have both acknowledged that their relationship started at the time the pilot for the show was produced). Now, they are very much together, living in the Los Angeles area, committed to a mutual relationship with the children and a future that’s filled with their production company, making films, other interesting projects and hopefully lots of love and happiness.

On August 21, 2010, Stephen and Anna said their vows at a private home in Malibu, CA amongst their friends and family under a tent near the ocean finally becoming husband and wife. 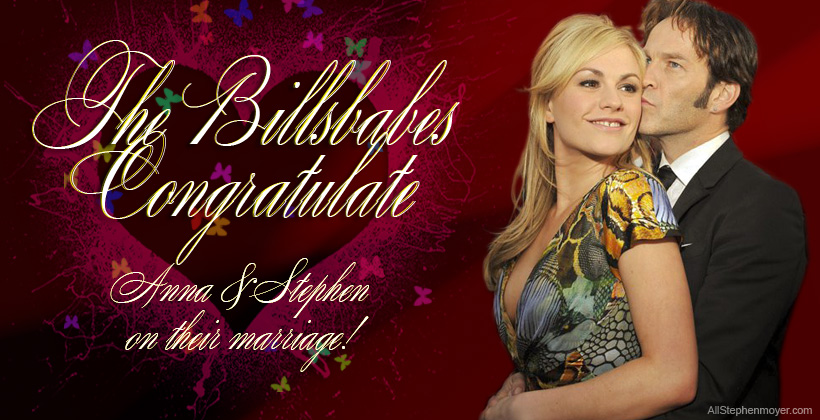 Anna and Stephen asked long-time friend and jeweler, Cathy Waterman, to custom-design the platinum bands, using Paquin’s rough-cut antique diamond engagement ring by the designer as inspiration. “I have been friends with Stephen forever. Watching him fall in love with Anna was magical. He lights up around her…and she glows when he is around,” Waterman told InStyle exclusively. “He put such thought and care into the ring that he proposed with…hours looking into stones, looking for the reflection that said ‘Anna.’ And he nailed it. I handmade their wedding bands, and seeing them as they walked down the aisle—I knew they were just right.”

Stephen had seen Anna on the London stage in “This Is Our Youth”, and been impressed but, prior to True Blood the pair had never met. He talks about his relationship with Anna, as follows:

“Anna and I met on this show. We met doing the job. And so the crew has seen us grow together. They have seen our relationship grow by watching us on set … we kept it from them to begin with …we wanted to keep it private. We didn’t want people to think we were f–king with their lives with something fickle. But honestly, there’s no one I’d rather work with. I really mean it. I love working with her, and that’s how it all started, by falling in love on camera … So, last year, Sam had his stuff coming up with Anna and at that point nobody knew we were a couple. So Sam’s a close friend, and I had to go to Sam and say, ‘Look. I need to tell you something. I need you to know. I don’t want you to find out later and feel like a heel.’ So I told him that was the first time I told him about me and Anna. And he couldn’t believe it! It’s about trust, you know. And that trust is a very important part of a relationship.”

He says that he and Anna Paquin virtually had to trade appearances when they started True Blood. “When we had those initial meetings with Alan, I was tan and blonde, and she was white with black hair, and we’ve kind of reversed roles completely.” Stephen has had his hair dyed black, while Paquin’s hair color is now Sookie’s gold. Likewise, Stephen enjoys the California sun, but vampires aren’t supposed to tan, whereas Sookie has to be even rosier than usual to contrast with her new nocturnal friends.

CHANGES IN THE FAMILY

In 2012, it was revealed in the press that Anna Paquin was pregnant with the couple’s first child who turned out to be twins. The two babies were born in September 2012 and these new members of the family have already celebrated their first birthday.

Now that Stephen has four children, Billy, Lilac, Charlie and Poppy, he joked during an interview, which was held during the making The Sound of Music, that he is working on a “Von Trapp family” of his own. Anna and Stephen are reportedly as happy and as busy as ever and with the additions to their growing family. The couple is seen walking and playing with the children whenever they go out together.

Because of the content of True Blood Stephen’s children haven’t been able to see him in the series, but, as Stephen says,

“Billy is very aware that his dad is playing a vampire and because he’s called Bill, he thinks the character is named after him (so he finds it very upsetting that he doesn’t get to see it.) Lilac, who hasn’t seen it either, does a very good impression of Kirsten Dunst in ‘Interview with The Vampire.’ She pretends to cry, you say ‘what’s wrong?’ And then she comes at you with her fangs out.”

True Blood has been shown in the UK, and Stephen’s parents are finally getting to see it. Stephen told a reporter , “My dad is like, yeah, I saw it, mate,” but while his mum is amazed by the way that the show has taken off she always professed that he was very talented;

The final season of “True Blood,” Season 7,premieres in June, 2014 and has already started production. Stephen is already working now, since he is directing the Season 7 premiere episode. Both Anna and Stephen have been quoted as saying they are very devoted to their jobs. With the end of the show, we expect that their production company, CASM, will take up a lot of their time and that they will both be looking for future projects while also living “the family life.”

While Stephen worked on his recent production of “The Sound of Music the whole family moved to New York City, even thought they are mostly in Los Angeles because of the production of True Blood and other Hollywood based projects. Stephen seems happy with homes on each coast of the US and one in London.

He says about home:

“There is this idea that home has to be one place, and I’ve only just realized that home really can be as many places as you want it to be, but England, he adds, is where his heart is.”

Wherever he is you can bet that he is being creative and sharing with others!

Read Lynn’s article on The Versatility of Stephen Moyer by clicking on the image below: