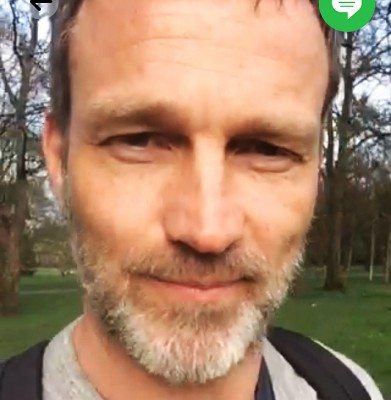 Yesterday, Stephen Moyer was interviewed from Wales, where he is filming “The Bastard Executioner” via his new mobile app, WEEV.

Adam and the Weevers asked Stephen a range of questions, but for me, the most interesting question and reply came when he was asked why he considers himself a “lapsed athiest.”

“I just stopped not believing and being a “naysayer” and beautiful things started to happen.”

It’s very typical of him to be so poetic and positive. Also, we’re glad wonderful things are happening for our favorite actor.

Oh, and when asked what Alexander Skarsgård was really like he replied:

“Alexander Skarsgård is a tall, beautiful, drunken puppy who is 6′ 4”.

GET WEEV
Why not download WEEV and join in on the conversation yourself.  Steve has been interviewed several times on the APP, so I’m sure he’ll do so again. DOWNLOAD IT HERE!

Oh, and by the way, many have been wondering if Stephen will be sporting a “beard” in his role of Milus Corbett in TBX. The photos of Stephen riding his horse, Quinton that we posted yesterday did seem to indicate that the answer to the question was yes, but there was no telling if those photos were recent. Well, now we have a definitive answer which is decidedly “yes,” from this WEEV video interview.

See two photos from the WEEV interview below: