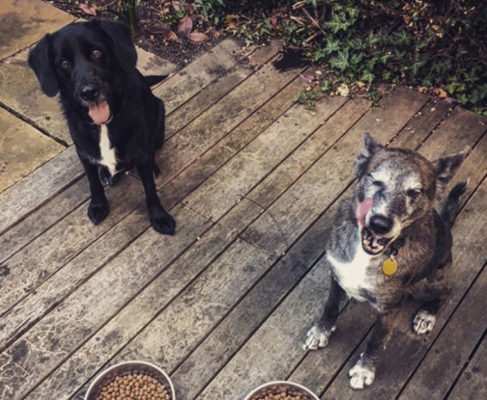 We are happy to report that the two pups (Banjo and Dave) who are owned by Stephen Moyer and Anna Paquin are finally free from their quarantine!

A few weeks ago, there were reports from Anna Paquin and hubby Stephen Moyer via Twitter about the unfair imprisonment of their two dogs, Banjo and Dave, at Heathrow Airport.

As you probably know, Anna and Stephen are currently in the UK filming of their production company’s CASM Films) new series Flack, starring Anna. When Stephen brought the pups, Banjo and Dave into the UK to join his wife, they were put into quarantine on March 26.  Then, early on Friday, March 30, a spokesperson for Heathrow Animal Reception Centre said that pets entering the UK through Heathrow must comply with the Pet Travel Scheme, which is designed to prevent rabies from entering the UK.

Stephen took to Twitter saying, “I’m all for protecting our borders, but this is ridiculous.”

“This allows dogs, cats, and ferrets to enter the country without quarantine as long as they comply with the regulations. Both dogs (Banjo and Dave) have been moved to a Defra-approved temporary quarantine center as they did not meet the legal requirements for entry into the UK. They will receive the necessary treatment before being reunited with their owners as soon as possible.”

Anna and Stephen couldn’t understand the quarantine, with Paquin posting on Twitter #FreetheHeathrow2: “Our dogs have traveled many times in and out of the UK and have perfect health records but are currently being held in quarantine for no apparent reason.”

Pet owners around the world have rallied their support, and several pooches have posted their own “Free Dave & Banjo” banners. 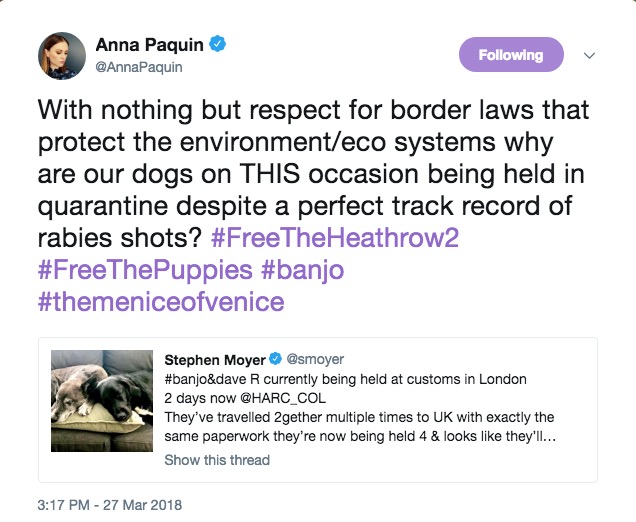 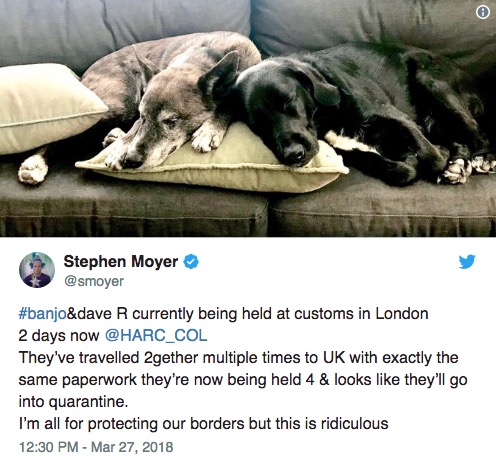 Stephen even posted proof, via a photo from when he was filming Safe House in 2016, that the dogs had just been in the UK and that nothing had changed.

We later learned that the issue was about the order of when the shots had been given to the dogs. Evidently, UK rules changed since the pups had last visited with Stephen when he filmed Safe House in 2016.

Nonetheless, we’re so happy for the poor puppies and would really like to have seen how they reacted when they were released from their quarantine and that the whole family is back together and hopefully all is well!

sources: stuff.co.nz and Anna Paquin and Stephen Moyer on Twitter.