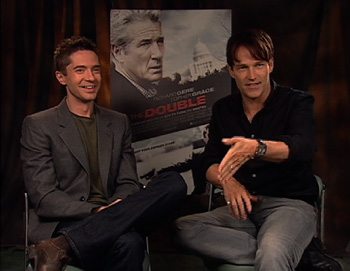 Below is another interview with Topher Grace and Stephen Moyer by buzzinefilm.com. In the interview, they talked about how they always wanted to play FBI agents while growing up in acting school, and how this film about the Cold War is still relevant today, all across the world.

Parimal M. Rohit: How does this film stay relevant 20 years later, in bringing up now?

Topher Grace: Sadly, when we were filming, they found…remember those Russian spies about a year ago that they found in America?

Stephen Moyer: Yeah, and at the time we were going, “Yes! This is going to be great for the movie – everyone will know about it now.”

TG: But also it’s probably not a great thing. But for the film, I do think, sadly, we are probably going to see some more waves being made over there than we have in the past couple of years.

SM: It’s interesting, actually, because there just, literally in the last week, has been an instance of a very similar thing happening in England, where a politician seemed to have a relationship with a Russian spy. It just happened last week – it just got uncovered. It’s constantly still happening, and this story isn’t based 20 years ago – it’s based now, and it’s unearthing the same issues that we’re talking about.

PMR: Can you talk about each of your characters you played in terms of making that issue relevant today, in terms of how you guys played… You’re playing the double side; you’re playing on the other side of the field – in the sense of how you bring that grayness to existence…

TG: The thing that was so great was the script. It’s got twist after twist. [Laughs] We’re trying to give the idea of more twists than a pretzel…which didn’t make the poster, but it’s still a really great one-liner.

SM: [Laughs] It should be in brackets.

TG: I don’t know if that would make people see it, but that would be funny. But it was a fantastic script, and when I read it, I play this young FBI agent who is obsessed with this one Russian spy that kind of got away about 20 years ago, and I get paired up with an ex-CIA agent – Richard Gere. And the coolest thing to me [laughs] – it has nothing to do with the plot – is that I grew up to be in a movie where I’m partners with Richard Gere. I did not see that coming, so it was a lot of fun.

SM: I play an ex-Russian officer, basically a spy, who is in prison in America, and he was trained at the same time as the character that Topher’s character is looking for – he was training Russian soldiers, and it’s a special kind of training called Systema that was part of the KGB training 25-30 years ago. Really interesting, and it actually exists – this extraordinary form of attack/self-defense. So it was a lot of fun. It’s interesting because I had a very similar feeling to Topher in terms of sitting with Richard and watching him, and those people who have been such a part of your sort of cultural existence – reading about, learning about, and watching – and it’s amazing to sit and actually be in those people’s company who were such a part of your childhood.

PMR: With the theme of the film, what personal experiences were you able to draw upon in finding your characters?

TG: I’m just really glad that I great up a spy.

TG: Because that really helped. I drew on that. [Laughs] No…

TG: Your Russian background really helped? [Laughs] No, I think you’re kind of in training to play an FBI agent or a CIA agent, if you’re a guy…from the age of two.

SM: Yeah, and certainly when it’s all you really want to do. I did three years at drama school, but really all I want to do is stand by the door jamb like that [makes gun with hand, held up].

TG: He’s so right. I’ve been ready for that. It did not take a lot of training. I never held a gun in the movie.

TG: [Laughs] That was the scene we cut out, for obvious reasons.

PMR: I think within the US, this film would have a lot of meaning, but abroad – what kind of…?

TG: Its premiere was in Abu Dhabi at the film festival there, and I’ve got to say they were thrilled to see a Russian bad guy in a film. They are ready for that to come back in the Middle East, for sure. But it was really interesting to watch with an international audience because there is something very universal about the film.

SM: I love thrillers. Every time I go onto iTunes or Netflix or On Demand, the first genre I always go to is Thriller. It’s the first thing I try to find. I just love the plots and twists and the turns…

TG: And the tension…

SM: I think there’s an audience for it everywhere, whether it’s about America or Russia or anywhere.