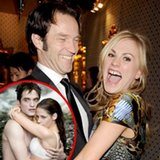 Well, there’s no bad blood between Stephen Moyer, and those from the Twilight films, but he and Anna did mock Twilight on their recent appearnace on Phineas and Ferb.

Stephen says he did it for his young kids, son Billy and daughter Lilac.

See the video in our previous posting about Anna and Stephen’s appearance here.

What he and Anna did was mock Edward, Bella, and Jacob on the Disney Channel favorite, by voicing characters seen in a vampire movie.

When Moyer’s “super-cute” vampire character realizes he’s unable to see himself in the mirror he shrieks, “I can’t see my hair!”

When Paquin’s character—actually named Kristen!—runs off with a shirtless werewolf (voiced by the original Teen Wolf star, Michael J. Fox), Moyer groans, “But Kristen, we were both moody outcasts. We loved each other.”

PHINEAS AND FERB – “The Curse of Candace” – After seeing the latest teen movie about a girl Kristen, and her werewolf friend Michael who are in pursuit of a vampire named Jared, Candace begins to freak herself out about becoming a vampire, especially after a real bat attacks her. Back at home, Phineas and Ferb are creating a series of gadgets to help their friends do the things that they want to do. When Candace unknowingly discovers these gadgets, they end up convincing her that she has indeed become a vampire. Meanwhile, Dr. Doofenshmirtz plans on changing the Tri-State Area into a reasonable facsimile of Gimmelshtump so that it will be easier to take over. This episode of “Phineas and Ferb” airs FRIDAY, OCTOBER 7 (7:00-7:30 p.m., ET/PT) on Disney Channel. (DISNEY XD)

“My kids adore that show,” Moyer told me yesterday at the Avalon Hotel in Beverly Hills, where he was promoting Friday’s release of The Double, his new spy thriller with Richard Gere and Topher Grace. “I haven’t done something that either of them can watch in a number of years, so that is exactly what it’s all about.”

Moyer and Paquin were asked to guest star after the British hunkster met Phineas & Ferb star Caroline Rhea backstage at Live With Regis & Kelly.”I didn’t really think about it until I was standing there going, ‘Oh, my God. I’m about to impersonate Robert Pattinson and I’ve never even seen one of these films,’ ” Moyer said. “But it’s done in a very sweet way. It’s very gentle. It was a lot of fun.”