On December 5, 2013, NBC broadcast a LIVE production of Roger’s & Hammerstein’s The Sound of Music. Stephen Moyer starred in the production as Captain Von Trapp alongside, Carrie Underwood. This was a huge undertaking and the cast prepared for two months prior to it’s airing. The ratings were so spectacular that NBC chose to re-air the program again on Saturday, December 14 for an encore.

Click on the TABS below to read my FULL REVIEW! 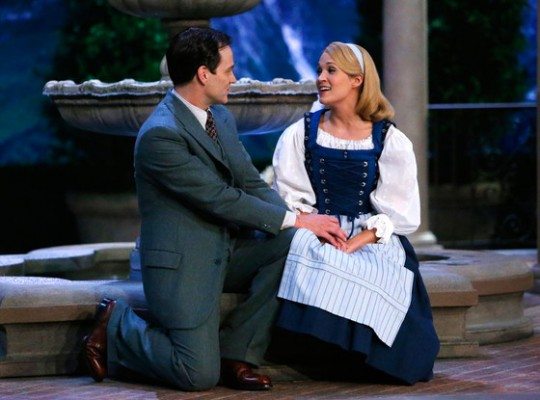 The Sound of Music, first produced in 1959 is a musical with music by Richard Rodgers, lyrics by Oscar Hammerstein II and a book by Howard Lindsay and Russel Crouse. It is based on the memoir of Maria von Trapp, The Story of the Trapp Family Singers. Many songs from the musical have become standards, such as “Edelweiss”, “My Favorite Things”, “Climb Ev’ry Mountain”, “Do-Re-Mi”, and the title song “The Sound of Music”.The original Broadway production, starring Mary Martin and Theodore Bikel, opened on November 16, 1959; the show has enjoyed numerous productions and revivals since then. It was adapted as a 1965 film musical starring Julie Andrews and Christopher Plummer, which won five Academy Awards. The Sound of Music was the final musical written by Rodgers and Hammerstein; Hammerstein died of cancer nine months after the Broadway premiere. Cast: 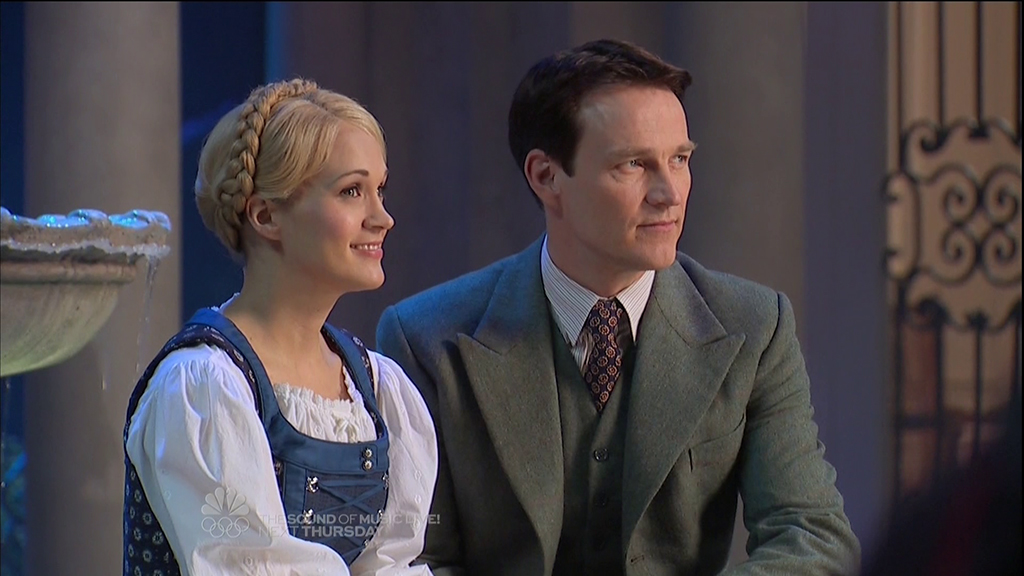 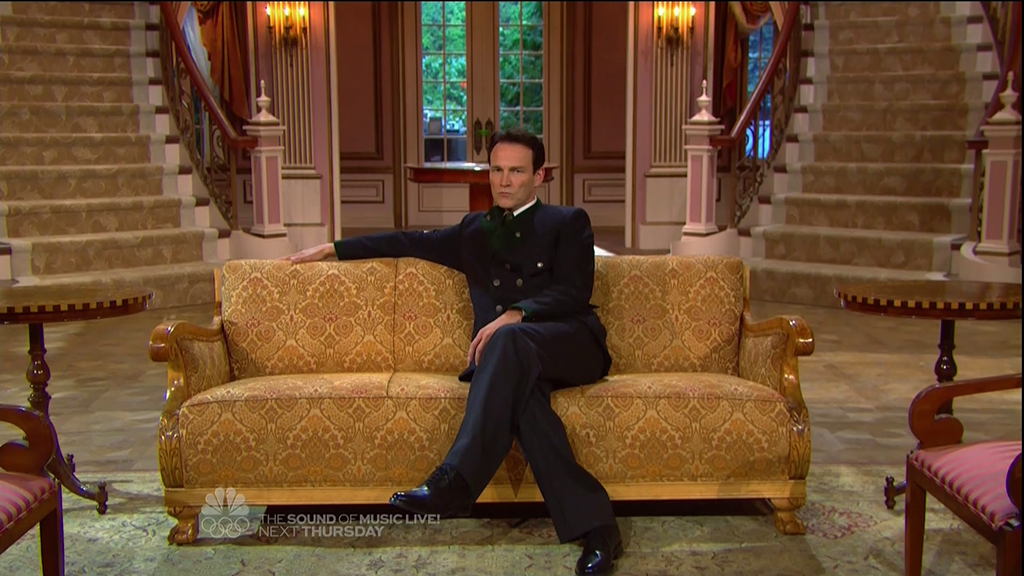 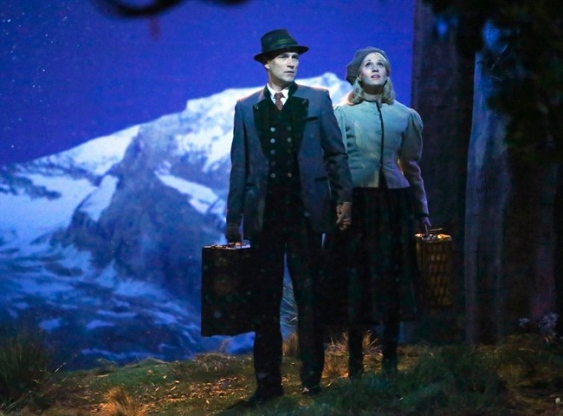 Edelweiss – The Sound of Music, Live!

The Sound of Music Live: Behind the Scenes Carrie Underwood, Stephen Moyer

Interview with Stephen Moyer at rehearsal for The Sound of Music

Stephen Moyer can sing!
For all I know, I’m suffering from the aftereffects of glamouring, but Stephen Moyer without a doubt proved to the world that he’s more than just a charismatic vampire with a God complex and a syrupy drawl. He’s a damn fine singer too! Whether it was joining the Von Trapp moppets in the middle of “The Sound of Music,” holding his own with Laura Benanti and Christian Borle during “No Way to Stop It” or eliciting pathos while singing “Edelweiss,” Moyer gave hope to the millions of True Blood fans that Bill Compton will bust out into song sometime next season. Your move, Skarsgård. Note to Truebies: Anyone else hoping that Eric and Godric were going show up as the SS officers escorting Capt. Von Trapp to his new naval position?

No “Sookeh”
Stephen Moyer stared at a beautiful blonde with a fondness for aprons for three hours straight and he couldn’t throw the Trubies a bone?

And as much as we love Stephen Moyer as Bill/Billith on HBO’s True Blood, we loved him even more as the mostly unlovable Captain Von Trapp. If we were Anna Paquin, we’d make him sing us to sleep every damn night. Of course, Stephen wasn’t the only TV star whose performance we enjoyed tonight…

Stephen Moyer was touching as the closed-off Capt. Von Trapp, who learned how to open up once more through music

Mr. Moyer, who plays a sexy vampire on “True Blood,” did his best to make the Captain seem enamored of his children’s young nanny, but he kept a hand over his stomach much of the time, as if suppressing acid reflux. He came alive mostly at the side of Ms. Benanti, who, as it happens, played Maria in a Broadway revival in 1999.

Kym Karath, actress who played Gretl von Trapp in the 1965 musical film The Sound of Music:

“Mystified & disappointed so far by SOM special. So far only happy with Stephen Moyer.”

As for Stephen Moyer, the English actor has gained fame by playing a vampire in HBO’s steamy ”True Blood.” Moyer’s Southern accent in that overheated series is so hilariously exaggerated, hearing him speak in his natural voice should be an improvement. As for his singing chops, well, if he can warble a serviceable version of “Edelweiss,” he won’t have too much to worry about.
And Moyer has a different set of shoes to fill as Captain Von Trapp. Plummer’s portrayal of the family patriarch in the movie was so notoriously icy, he seemed barely able to conceal his distaste for his supposed love interest, his children, and everything warm and cuddly about this most wholesome of musicals. Perhaps Plummer was focusing more on the Nazi-threat storyline, and less on the raindrops on roses and whiskers on kittens.
LATimes:

But where Underwood could have used the most help, from her love interest, Captain von Trapp, little was coming. Stephen Moyer (from “True Blood,” but with plenty of stage credits) had the anger and the stiffness the role certainly requires, but not the humor it needs. There was little sense, other than our own knowledge of the play or expectations of the form, that they were fated to fall for one another. He did sing well.

The whopping ratings success of NBC’s The Sound of Music Live! last Thursday — 18.6 million total viewers, with an enviable 4.6 demo rating — has, not surprisingly, already yielded plans by network brass to mount another such production next year. http://www.tvovermind.com/

There’s a premium on live and special event programming these days, and NBC tapped into that in a big way last week in dominating the frame with one of its most impressive performances in years.

The Peacock, which is powered in the fall by the one-two punch of DVR-proof “Sunday Night Football” and the mostly live music competition series “The Voice,” added another watch-me-now event to its roster with a live presentation of “The Sound of Music.”

Go back to On The Stage