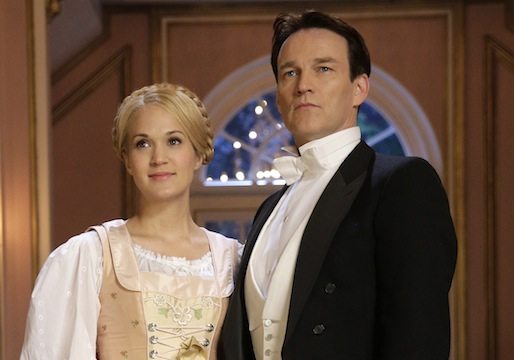 NBC launched their first musical in December 2013 with “The Sound of Music Live!,” which starred Carrie Underwood as Maria and Stephen Moyer as Captain Von Trapp.  A year later came “Peter Pan Live!,” also on NBC, and last December the network served up “The Wiz Live!” Fox got into the act this year with “Grease: Live!,” “The Passion” and “The Rocky Horror Picture Show,” and on Wednesday night NBC resumed its December tradition with “Hairspray Live!”

Three years and seven shows into the stage-musicals-on-television phenomenon NBC has not topped it’s first attempt in the ratings.

It’s pretty obvious to us that not only Carrie Underwood brought fans, but Stephen Moyer did, too.  He outdid himself in his performance demonstrating what an amazing singing voice he has and how varied his talents are in transitioning from Vampire to the Austrian Captain.

In terms of ratings, which is what this is really all about, “The Sound of Music” is the king (more than 18 million viewers), fueled no doubt by a curiosity factor, since it was first. “Grease” is second at about 12 million, then and “The Wiz” at 11.5 million. Preliminary numbers for “Hairspray” put it somewhat behind those. But in general the bloom seems to be off the rose, and these musicals are settling into a good-but-not-spectacular ratings zone.

So maybe the phenomenon continues indefinitely, maybe not. One thing this writer believes is that at Christmas time viewers want upbeat, friendly shows with excellent music and songs.  They long for their favorite singers and dancers and want escapism for sure.

Read more about the first production of The Sound of Music LIVE! by going to our Movie & TV Page about it by clicking on the banner below:

Click here to go o on over to the New York Times to read the article about the making of these seasonal musicals for TV.