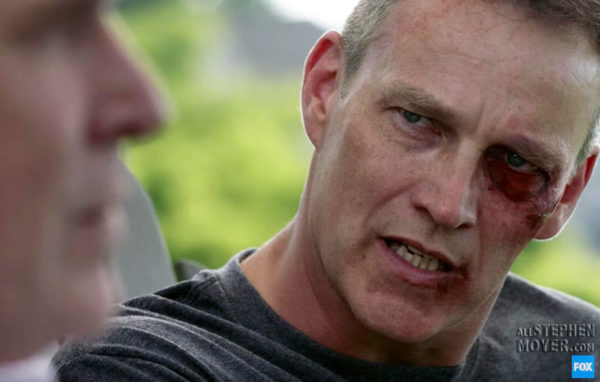 Stephen Moyer’s new series, Shots Fired premiered tonight on Fox and it started off being very powerful. However, for the Moya fans, this particular episode didn’t include too much Steve. We’re hoping to see him more in future episodes.

Although Stephen Moyer was not in a large part of the first episode of Shots Fired, he did make himself known to the investigators. I think he will become Deputy Beck’s protector as I expect the Sheriff isn’t going to last too long and Officer Breeland will have to take over duties of protecting his men.  See the photo below from the promo for episode 2, showing Officer Breeland talking with the Sheriff, which must be after some altercation which caused his bruised face. That’s must my prediction, but we’ll have to wait and see what happens to see if I’m right. We’re hoping to see Officer Breeland a lot in future episodes.

Below are some videos from the show that include, the opening sequence (which I thought was quite well done), a preview of what’s to come in future episodes, a scene from episode 1, and a round-table discussion including the creators and some of the cast.