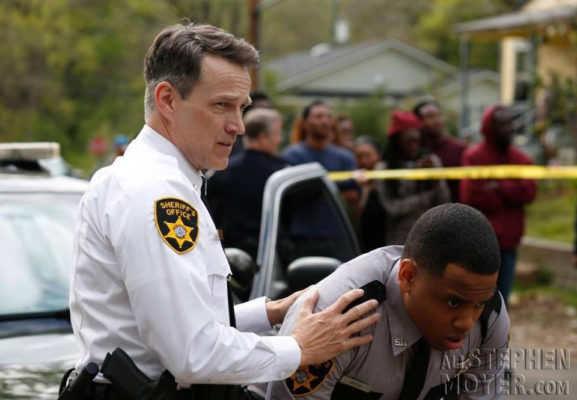 As all the Stephen Moyer followers know, his new Fox series, Shots Fired will premiere on March 22 at 8 p.m. on Fox. We’ve been waiting for some substantial information to come out about the show and we now have some. We expect that as the premiere gets closer even more will be out there. Below are two articles that provide some new or more detailed info about the series:

And on March 22, Fox is set to debut “Shots Fired,” a 10-hour series about a racially charged police shooting set and filmed in North Carolina (primarily around Gastonia and Salisbury, but also around Charlotte, Concord and Mooresville).

“Shots Fired” plays off the many recent police shootings in the news involving unarmed black men, though the show opens with a black police officer (Mack Wilds) in fictional Gate County (not Gates) shooting and killing an unarmed white college student from N.C. State University. The attention that shooting gets angers the African-American members of the small North Carolina town, because a previous shooting by police of a black teenager in the town was not investigated.

As far as the attached big star names, Helen Hunt plays the governor of North Carolina and Richard Dreyfuss plays the owner of a corporate prison system.

Fox’s “Shots Fired,” whose 8 p.m. premiere March 22 leads into “Empire’s” return from hiatus, represents more of a compromise between its hard-edged subject matter and the soapier music drama that follows it.

Stephan James (“Selma”) stars as Preston Terry, a DOJ lawyer who’s paired with investigator Ashe Akino (Sanaa Lathan) to look into the death of a young white man at the hands of a black sheriff’s deputy, Joshua Beck (Mack Wilds, of “The Wire,” where he was known as Tristan Wilds).

It may look as though “Shots Fired,” in making the shooter black and the dead man white, is avoiding what would seem to be the more obvious narrative, but be patient. These producers, too, are playing a longer game, one that will eventually deal with the effects on both justice and the economy when politicians’ get-tough rhetoric is put into action.

Helen Hunt plays North Carolina Gov. Patricia Eamons, whose good intentions may not be able to compete with the demands of one of her biggest supporters, Arlen Cox, and Aisha Hinds (“Underground”) is Pastor Janae James, who’s not above using the pain of two bereaved mothers (played by Jill Hennessy and DeWanda Wise) to further her own agenda.

There’s more than enough drama here to go around, but “Shots Fired” isn’t taking any chances, adding sexy story lines for Lathan and Terry, who, when they’re not at loggerheads, can be found getting busy with others. The buttoned-down Terry soon ends up in bed with an aide to the governor, and the loose-cannon Akino distracts herself from drama involving her ex with an equally problematic partner.

The six episodes I’ve seen manage to draw connections between what we’re used to seeing on most network TV police procedurals and the consequences they deal with far less often. The personal and the policy stuff don’t always mesh perfectly, but if adding soap gets a few more people to open their minds, it will be worth it.

As more information about the series surfaces, we’ll be sure to post about it, so come back often to check for more news.