As the release of Stephen Moyer’s film “The Barrens’ approaches, Cheryl Durst, one of our featured guest writers, has written about the subject of the film, The Jersey Devil and it’s location in the New Jersey Pine Barrens.

Intro: The Barrens and The New Jersey Devil

AllStephenMoyer.com asked me to write an article describing The Barrens so that True Blood/Stephen Moyer fans who live outside of the United States would have some understanding of the area in which the setting of Stephen’s most current movie making project takes place. Even though, as a child, I spent some summer vacations in Ocean City, New Jersey, with my family, I didn’t know a thing about The Pine Barrens until I did the research for this article. Most likely many Americans don’t know much about this particular part of New Jersey either. The movie The Barrens was actually shot in Canada but the setting is supposed to be in the Pine Barrens due to the nefarious legend of the Jersey Devil and the creature’s impact on the character which Stephen portrays in the movie.

Due to the rich bio-diversity of The Pinelands and industrial and commercial development threatening to encroach on it’s borders and interior, The Pinelands National Reserve was formed by the Congress of the United States. The Pinelands is the first National Reserve to be created in the United States and falls under the National Parks and Recreation Act of 1978. The Pinelands National Reserve is made up of approximately 1.1 million acres in size and takes up 22% of New Jersey’s land mass. It is said to be the largest body of open space on the Mid-Atlantic seaboard between Richmond (Virginia) and Boston (Massachusetts). Underneath this national reserve it is estimated that 17 trillion gallons of the purest water in the land is housed in natural aquifers. This important ecological region is so internationally important that in 1979 the state of New Jersey formed a partnership with the federal government to preserve, protect and enhance the natural and cultural resources of The Pines. In 1983 The Pines was designated a United States Biosphere Reserve by UNESCO which is an agency of the United Nations and in1988 The Pines was recognized as an International Biosphere Reserve. Currently, the area is protected with help from the Pinelands Comprehensive Management Plan that limits development of the land.

The legend of the Jersey Devil dates back to 1735 and originates from the birth of the 13th child to the Leeds family. As with most legends and folklore, there are variations of the facts that perpetuated the event that started it all. One account states that the name of the woman who gave birth to the Jersey Devil is Deborah while another account states that Jane is the name of the woman. Both accounts also use two different names for the husbands of the women with one being named Daniel and the other being Japhet. The commonalities are that Leeds is the last name of the family, the Jersey Devil was the 13th child that Mrs. Leeds birthed, the Leeds family lived near The Pine Barrens and that the Jersey Devil is thought to be alive and active in The Pine Barrens to this very day.

So, as one of the legends goes, a severe storm was raging the night that Mrs. Leeds, who was rumored to dabble in witchcraft, started labor with her 13th child. The room in which she was laboring was full of women who were there to help her during her labor. They were also there out of curiosity concerning what kind of child she would deliver as some believed it might turn out to be a monster or some sort of demon. To the delight of some and the disappointment of others, the baby arrived looking perfectly normal. But within a few moments the baby started to morph into a very tall beast, looking similar to a dragon but with the head of a horse, a snake-like forked tail and large bat-like wings. Once the metamorphosis was complete, the beast began beating the women, including Mrs. Leeds, and then with a loud bellow it flew up a chimney and vanished into the stormy night. The beast was referred to as The Monster of Leeds as well as The Jersey Devil and was said to poison ponds and creeks, wreck havoc upon the livestock, ruin the crops and sour the milk. The beast supposedly foretold the sinking of ships at sea by appearing on the New Jersey shore line just before a ship wreck.

Another version of the birth of the Jersey Devil has some similarity but is different enough to warrant mentioning. This version has Mrs. Leeds making a deal with the Devil himself. Mrs. Leeds has already given birth to twelve children and finds herself pregnant with yet another child, the thirteenth child. Mrs. Leeds told the Devil that he could have the baby as soon as it was born if she could have escape from her marriage and be returned to her youthful beauty. This deal with the Devil was witnessed by a midwife who was at the side of Mrs. Leeds when she went into labor. As this legend goes, the baby was born already in the form of the creature and it immediately killed the midwife and then flew up the chimney and has roamed the The Pine Barrens ever since. I have no idea if Mrs. Leeds escaped her marriage or if her youthful good looks returned to her but it all makes for an interesting story and created a monstrous legend that still lives today. 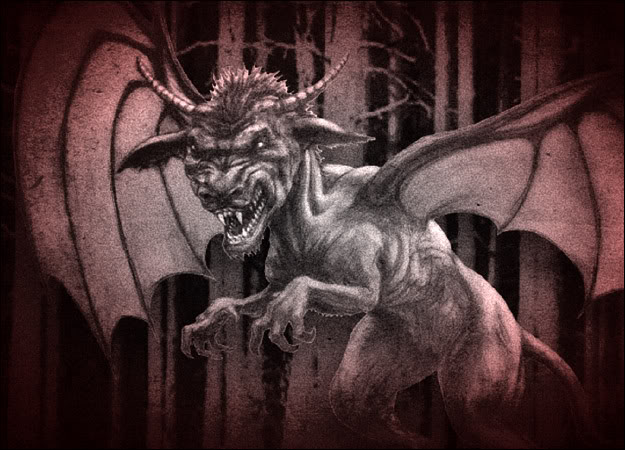 From The Jersey Shore!

I had hoped to find out if anyone I knew from New Jersey had experienced anything frightening while driving through the The Pine Barrens or if they had a neighbor that might have shared a story about the Jersey Devil but I came up empty handed. The only Jersey Devil stories I heard from people were those of the hockey team from New Jersey that took their team name of the legend of the beast.

It wasn’t until I attended an artisan show in Shepherdstown, West Virginia, that I met a mother and her son who originally hailed from New Jersey and had a few stories to tell. Their names are Toni-Kay Dye and Michael Dye and they are both artists. Michael creates beautiful wizard wands carved from wood and Toni-Kay creates paintings on bird feathers. Even though their business cards showed Oldtown, Maryland, as their residence, as I began talking with them their New Jersey accents were evident to me. I told them I was writing an article about The Pine Barrens and asked them if they were in fact from New Jersey and once they acknowledged that they had lived in New Jersey most all of their lives, I asked them about the Jersey Devil.

Both Toni-Kay and Michael talked about the feeling of remoteness they got while traveling the road going through The Pine Barrens. They said there are certain stretches of road swathing through The Pine Barrens that would give anyone an uneasy feeling because no sign of civilization can been seen for miles other than the road itself. They mentioned that they would both feel very uneasy if they had the unfortunate luck of a vehicle breaking down while there, on such a desolate stretch of road surrounded by acres and acres of nothing but pine forest. Michael had an interesting theory concerning the origination of the legend of the Jersey Devil that had to do with pirates of days gone by. Michael said that he had long thought that pirates, having easy access to The Pine Barrens through the estuaries, easily could have buried treasure on the banks of the rivers as well as in the forests. By creating a story about a beast that roamed the forest land in The Pine Barrens, the pirates might have hoped to keep their treasure hidden from those townsfolk who might be curious enough to explore the forest and river banks.

While doing research on this article I found that the water that flows out of The Pine Barrens also sustains the the estuaries that border New Jersey’s Atlantic coast. Most of the Atlantic coast estuary of Barnegat Bay is within the Pinelands National Reserve so Michael’s pirate theory is plausible.

Michael also mentioned that he, himself, used to fish in some of those rivers and creeks running through the outskirts of The Pine Barrens and he mentioned that Bull sharks frequented the brackish water during late summer and early autumn when they mate. Bull sharks can live for extended periods of time in fresh water even though they are primarily salt water fish and they are very aggressive sharks, especially during mating season. Michael and I agreed that Bull sharks probably injured and killed more people in the rivers near The Barrens than ever did the Jersey Devil, that supposed beast thought to be an amalgamation of various other animals.

A Beautiful Place – An Eerie Place

With 1.1 million acres within The Pine Barrens plus a legendary devilish monster roaming the area for a couple hundred years makes for an interesting camping trip for any family! And, who better to lead his family into a wilderness area than Stephen Moyer who will portray a family man named Richard. In this film, a weekend camping trip and a time for family bonding will turn into a horror show when a member of the family is convinced they are being stalked by the legendary beast from The Pine Barrens: The Jersey Devil. It is interesting how a beautiful and serene setting in a woodland can become an eerie and unsettling arena of fear under certain circumstances that will take place in The Barrens to be released in the fall of 2012.

The Barrens deserves a wide theatrical release and the fans have started a petition to send a signal to the distributor Anchor Bay that we want to see The Barrens in a theater near us. Please support the petition by signing it and spreading the word.

Cheryl Durst is an avid animal advocate who lives on seven acres in the Eastern Panhandle of WV with two rescued Standard Poodles and soon to be joining them will be a rescued Thoroughbred mare, Diabolical Lady. She has been a guest writer on The Vault and AllStephenMoyer.com for over a year. In addition to enjoying True Blood’s roller coaster ride of emotion and excitement, she says that she has great admiration for the talented cast members as they bring to life the scripts written by an equally talented writing staff.