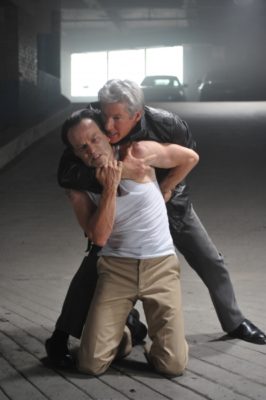 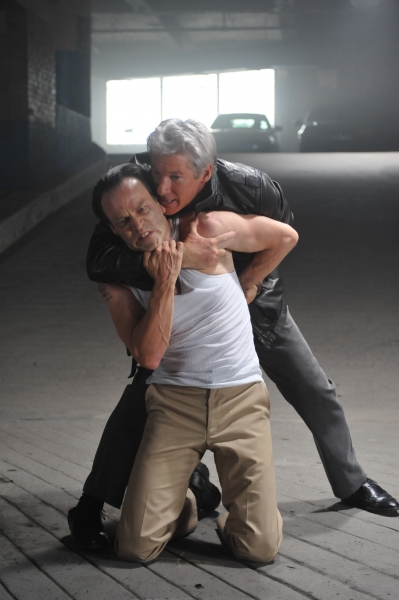 Yesterday was a fine sunny day in the 70’s in Los Angeles, but instead of being in the sunshine, I spent my afternoon sitting in one of my favorite locations, a dark movie theater.

Stephen Moyer’s new film “The Double” opened in theaters here in Los Angeles yesterday and I was at the very first showing of the film at the Regent Theater.

Right off, I want to go on record to say that I liked the film a lot. It’s a tight, clean and neat, well done political thriller that kept you guessing throughout. Even though the trailer divulges one of the film’s secrets, it really didn’t give too much away because there are plenty more surprises to keep you guessing throughout about how the film is going to end.

I also truly enjoy this genre of films that make your mind whirl while trying to solve the mystery and keeps you guessing right to the end, and so does Stephen Moyer.

During his press day this week Stephen said several times that he always chooses a thriller first when he’s looking for a film to see; I feel that way, too. I love Hitchcock’s thrillers the most, and how the classic director sends the viewer on a trip through the film to search for the “MacGuffin” such as in, The Thirty Nine Steps, Sabotage, North by Northwest, etc. Similar films like No Way Out, Charade, Eye of The Needle, just to name a few, are also favorites because they keep the viewer in suspense. The Double fits nicely into the genre and does it proud.

Topher Grace and Richard Gere are very good and their collaboration is quite believable. Topher, plays Ben Geary, the young, upcoming FBI agent, who has written his master’s thesis on the character being hunted, “Cassius” and is considered the expert on the topic. He does well in showing his obsession for the spy he wants to find. The twist with his character, which isn’t revealed until the end of the film, was unexpected on my part but added much to the film’s reality.

Richard Gere plays Paul Shepherdson and does his signature calm and cool portrayal in the role of the retired CIA agent who has a secret. There is a quietness about Richard Gere that does well in these types of parts where we know there is more to his character which isn’t revealed until the end. I remember his portrayal of the husband in “Unfaithful” and he has brought the same stillness that hides a secret rage in that film, to this one.

However, as you all know I went to this film primarily to see our favorite actor, Stephen Moyer’s portrayal of Brutus, the Russian Spy. I can tell you all that his performance was the best in the film. Stephen completely inhabited his character and the good-looking, charming and funny man we have learned to love is nowhere to be seen here.  This is a real testament to his acting abilities since it must be hard to hide that contagious smile and lovely baby blues. Truly, there were also no hints of his previous roles, either. For example, we see no evidence of Bill Compton’s slow movement or southern drawl, no signs of the lost beach bum from The Starter Wife, or of the agoraphobic Andrew in Restraint, etc. This was a completely new characterization that Stephen captured perfectly. I really felt that this man had been locked up for 15 years and had no life. It also seemed to me (as a non-Russian) that the Russian accent adopted by Stephen was spot on. My only regret was that there wasn’t enough of him in the film to see. He did a great job, with an excellent character part that he could really sink his teeth into, (no vampire pun intended). I can’t wait to ask him how he did the battery scene though, truly amazing!

It’s a shame that this film will not have a wider distribution preventing many from seeing it in the theaters, (click here to see where it’s playing) like I did (a perk of living in LA). But, it should be out on DVD soon, so if you’re unable to see it in the theaters, I highly recommend getting the DVD and watching it when it comes out at the end of January 2012.  It’s worth viewing on its own, but a definite must-see, just for the wonderful performance by Stephen Moyer!