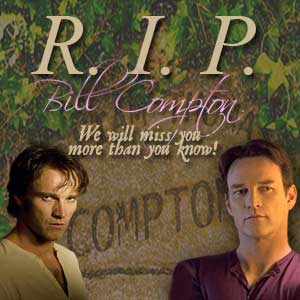 It is with the great sadness that we not only say goodbye to True Blood the show, but to our favorite character, Bill Compton.

Now that a few days have past since the very last episode of True Blood has aired, we are ready to pay tribute to the vampire who was such an inspiration for us and all the Bill fans.

Bill decided to leave this life on his own terms, but that final tragic scene is not how we would like to remember Bill. We would like to commemorate him for the beautiful, loving and complex being that he was.

Before he was turned a vampire against his will at the end of the American Civil War, Bill was a dedicated husband to his wife Caroline and loving father of Sarah and Thomas.

His maker Lorena led him away from his humanity and he embraced the bloodthirsty vampire lifestyle until he started to struggle again with the memories of his humanity. He finally managed to break free from Lorena in the 1930’s and set out to live his own life always struggling with his own nature and darkness within.

When he arrived in Bon Temps in 2008, he was on a mission for his Queen, Sophie Anne to procure Sookie Stackhouse for her. While Bon Temps had been his home town during his human life, and he moved back into his family’s home when he arrived, he was there just to do a job, that is, until he met Sookie which changed everything.

Sookie was his miracle, the love of his vampire life, and she brought him back to his humanity, but also made him feel the burden of his darkness even more.

During Bill’s vampire life, he was forced to do things that were ultimately against his nature. He had to turn a young girl into a vampire; he was kidnapped by the King of Mississippi, held hostage and tortured by his maker and completely lost his way and sanity by becoming a vampire god.

As King of Louisiana he was caught between a rock and a hard place with the Authority trying to control him. He ultimately became a vampire savior, almost losing his life when he released everybody from vamp camp.

At the end of his vampire life, he reconnected with his love Sookie and then shared precious moments with her and his beloved progeny Jessica, whom he gave away in marriage.

Bill lived a long and complicated life filled with moments of utter happiness and deep despair and after he contracted Hep-V he decided that it was time for him to go.

We will never forget the moment we first laid eyes on him, when he strolled into Merlotte’s and ordered a Tru Blood.

We (Shad and Lynn), and all the Bill fans will remember the amazing moments we have had with Bill during the seven seasons of True Blood.

Goodbye dear Bill, we will never forget you.
Rest In Peace.

Below are two tribute videos to Bill that we thought might be nice to add to this post. If you haven’t seen the end of True Blood, I suggest you wait to watch them until you do.