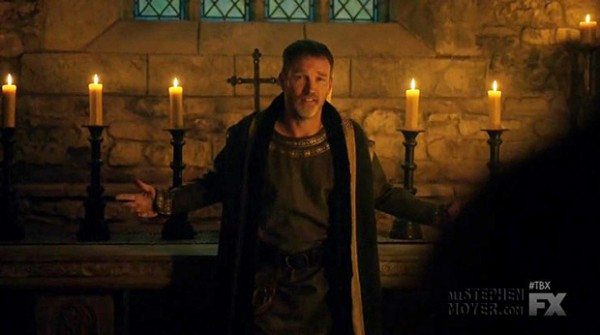 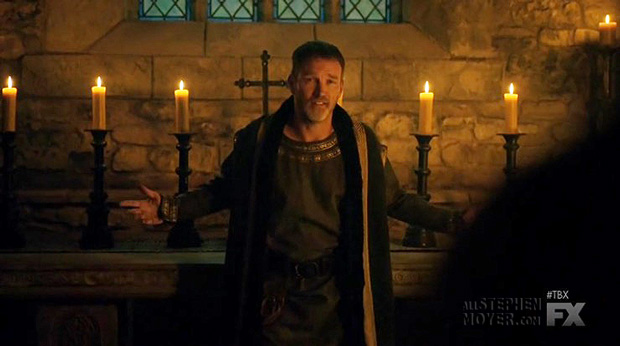 Below is an article about the upcoming episode of The Bastard Executioner “Effigy/Delw” from Spoiler TV.  We’re hiding it’s content behind our Spoiler wall, so if you don’t want to get spoiled, don’t read it.

One part of the spoiler content which we are happy to share with you in front of the Spoiler wall is the following is the praise they give to Stephen:

Stephen Moyer continues to impress as Milus, showing once again why he’s one of television’s best actors. This is a role he was born to play.

Previously on The Bastard Executioner: English knight Wilkin Brattle takes upon a new identity as an Executioner when his family and friends are slain in their village. But, what he really wants is vengeance. And with his new found position, that might just help him to accomplish that.

The Bastard Executioner continues this upcoming Tuesday with another intriguing and thrilling episode. The show takes an unexpected turn when an unlikely suspect is charged with treason, resulting in the Baroness at crossroads about what she should do. Milus says she’s obligated to follow the law and take swift action, but she’s not so sure. The Baroness seeks other alternatives and continues to listen to council from Wilkin, much to Milus’s displeasure.

Milus has elevated himself to a great position of power over the years, and with Wilkin starting to have an effect on the Baroness, his position is weakening. Things are only worsened for him when Wilkin risks his life to help her, making her forever grateful. But, what does Milus plan to do to regain control? Stephen Moyer continues to impress as Milus, showing once again why he’s one of television’s best actors. This is a role he was born to play.

Speaking of Wilkin, our main protagonist struggles to deal with the pressure of being the executioner and taking on all these responsibilities, as he tries to remain on task of finding all those involved in the slaughter of his village. By the end of the episode, both Wilkin and Prichard will have gained a lot of respect from others inside the castle, which puts them one step closer to accomplishing their goal.

Wilkin’s visions also continue into this episode, but they do start to feel unnecessary. I don’t mind having them when they add something to the narrative or give us insight into his supposed destiny, but when they appear for no apparent reason, it becomes bothersome. Flashbacks though play a key part this episode, and the show delves a little bit into Wilkin’s childhood, and there’s one discovery you won’t see coming. It will leave you speechless.

Elsewhere, Berber and Calo enlist Annora for help when one of their own goes missing. Jessamy struggles to deal with what might happen to her now that she has lied to save Wilkin. Father Ruskin shows off his hidden talents and has an important message for the Baroness. And Annora continues to guide and help Wilkin.

A lot more happens, but that’s all I’m going to give you as I don’t watch to spoil anything. Below though are a few dialogue teasers.

“I want to plunge a blade into the man that slaughtered my wife and son.”

“The anger is for the guilty, you need each other.”

“Well, I believe that is a sufficient amount of excitement for one day.”

“At this very moment, our king is deciding the fate of Ventris.”

“Handling a blade is the task of my trade.”