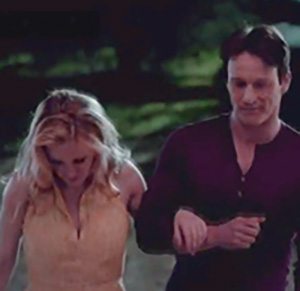 Stephen Moyer appeared on Kelly and Michael yesterday, and during his appearance, they showed a “sneak peek” at the upcoming episode of True Blood, episode 5 “Lost Cause.” In the scene we see Bill walking with Sookie and he talks about how it’s strange to him for men and woman to be friends.

Thanks to LIFEisNotEasy for the video.