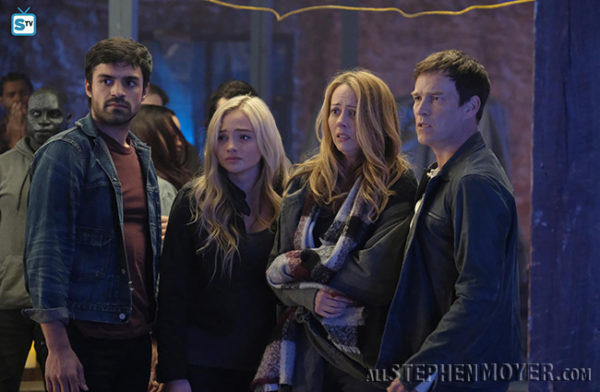 Fox has released new promo images for The Gifted Finale episodes 12 & 13, which airs in two weeks on January 15.

We’ve added all the Stephen Moyer photos to our gallery (see buttons below) and you can see the rest of the photos not including Steve at the source of this article.

THE MUTANTS MUST STICK TOGETHER AS THEY FIGHT FOR THEIR LIVES ON THE ALL-NEW, SPECIAL TWO-HOUR SEASON FINALE OF “THE GIFTED” MONDAY, JANUARY 15, ON FOX

Dr. Campbell attends an anti-mutant summit, attempting to take the Hound program national, and some of the team at Mutant HQ goes on a dangerous mission to stop his efforts. Polaris learns more about her past and makes a crucial decision that could have impactful consequences. Meanwhile, the Mutant HQ comes under attack and, with everything to lose, relationships are put to the test and alliances shift in the all-new “”eXtraction/X-roads” special, two-hour season finale episode of THE GIFTED airing Monday, Jan. 15 (8:00-10:00 PM ET/PT) on FOX. (GIF-112/13) (TV-14 L, V)