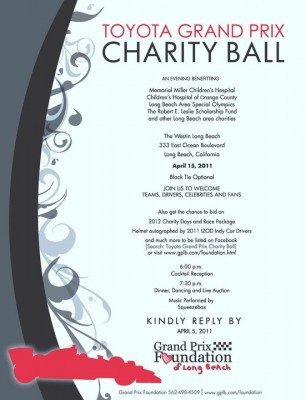 On Friday, April 15, the Toyota Charity Ball – a gala, black-tie event – is presented by and benefits the Grand Prix Foundation. The star-studded evening includes cocktails, dinner, entertainment and silent and live auctions. This year’s Charity Ball will take place at the Westin Long Beach with a cocktail party and silent auction commencing at 6 p.m. and dinner, dancing and the live auction getting underway at 7:30 p.m.

The Grand Prix Foundation of Long Beach likes to put on a great party! Long Beach’s official launch of the 2011 Toyota Grand Prix, in which Stephen Moyer will participate, kicks off this week with the city’s hottest party, all to benefit Long Beach children’s charities. 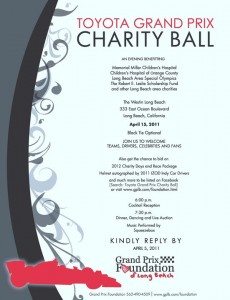 Ticket prices are $150 per person or $1200 for a table of eight and include a four-course formal sit-down dinner, which begins at 7:30 p.m., dancing to the local live band, Squeeze Box, and access to live auction items. Indycar Series and Toyota Grand Prix of Long Beach drivers and Pro/Celebrity drivers will be on-hand for photos and autographs. Additional celebrity guests will also be attending.

The Toyota Grant Prix Charity Ball night’s charitable contributions are a result of a premium live auction and more than 60 silent auction items including travel, race enthusiast collections, and other lifestyle items: