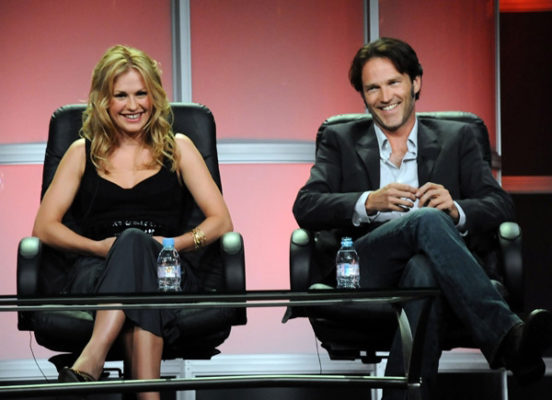 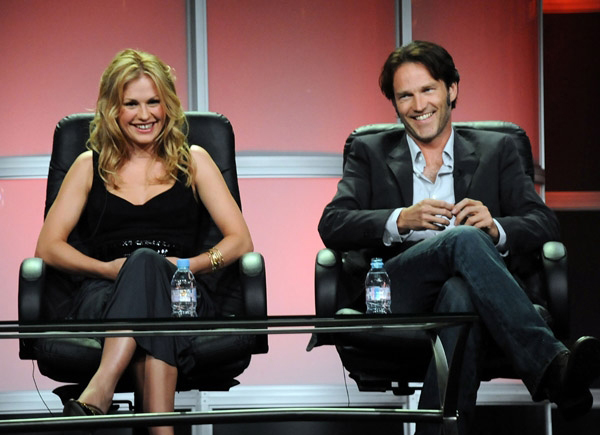 Below is text from questions asked at The Television Critics Association interview with Alan Ball, Anna Paquin and Stephen Moyer gave in Beverly Hills, California July 10, 2008.

Anna Paquin, what do you think of doing TV after doing movies all of your career?

Paquin: I think ensemble acting is the most fun, because in this case you have extraordinary people around you that you get to play with all day. I wanted to re-create the adventure and the fun and the sort of excitement of reading those books and the feeling like I had stumbled into this world. I have to see what happens.

Tell us about your character.

Paquin: She’s tough and she’s courageous and she’s smart, but she’s sweet and she’s innocent and she’s naive and she’s quite sheltered, and she is completely open-minded, which in her very small town is a little bit less common, and there’s just something about that level of enthusiasm that she has for things that are new and things that are exciting—as opposed to being frightened—that I think is really appealing. And you see that with the relationship with her grandmother that it’s fascinating. Even though she kind of gets into trouble quite frequently in the show, she’s still a very tough little girl, capable of taking care of herself.

What did you think about going blond for this role?

Paquin: I love it. Boys like to stare at blond girls—apparently it’s totally true, so it’s amusing and quite lovely. … Boys like blond girls, who knew? … It’s amazing how much someone’s voice is informed by the situation that they live in, and there is a kind of music to the Southern dialect that is very much—from an outsider perspective, obviously—a product of that sort of very hot, very sort of laid-back at times, because of that overwhelming heat, sort of environment. That was a huge part of becoming that character, and then the whole blond thing and the tan thing.

When he cast me I was a pasty brunette from New Zealand, and now I’m a Southern blonde. So you have respect and love a director who will cast someone who isn’t necessarily the most obvious choice, and who can see the potential in their actors and actually create something.

What do you think about dating vampires?

Paquin: I stopped dating vampires when I was 15, so I couldn’t possibly remember. Obviously there’s an immediate fascination and attraction between Bill and Sookie, if for no other reason than anyone else is terrified of him and she’s just dying to go up and take his drink order. And we do get to see the roller coaster of that relationship because, obviously, as I guess the title of the book would suggest, having a vampire as a boyfriend isn’t always the simplest of things to choose. So I don’t know how to say much more about it without giving away the plot.

Stephen Moyer, what do you think is different in this series?

Moyer: Something I don’t think I’ve ever seen in a series … is how you get to the end of each episode, and the episode begins where that episode ended, and that happens all the way through the season.

Are you ready for the rabid fans who have certain feelings about vampires and how they should be depicted?

Moyer: Bring them on. Everybody has their idea of what a vampire is going to be, and they are never pleased all the time, if you look at something like Interview With a Vampire and those two amazing actors, and not everybody liked what they did. Some people loved it, and I’m well aware that there’s going to be people who really like it and—

Paquin: Really hate it. How is having people who are really excited about your show ever a bad thing? I mean, come on, that’s what you hope that a show is going to have, and if they are already there, waiting to be really excited, then awesome.