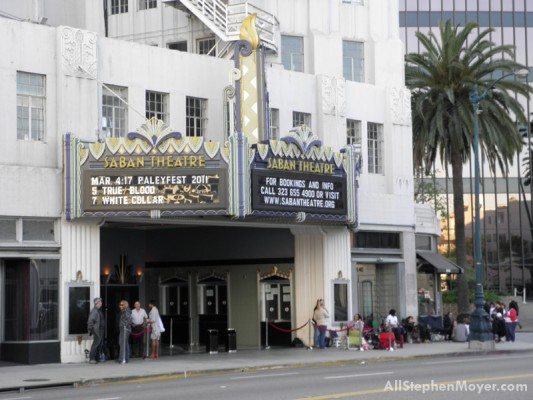 We’ve been reading all the stories and watching all the multitude of videos that have been posted during the week and we’re already pretty “Paleyed out”, but not me. I will remember the weekend fondly because I got to meet online friends I hadn’t met before and rekindled friendships with those I knew. Oh, I also got a pretty special hug.

Ten of the fans from the AllStephenMoyer Forum came to California last week and we spent the weekend essentially together. They came from all over the country just to go to Paley. We represented, eight states, California, Washington, Nebraska, New York, New Jersey, South Carolina, Pennsylvania, Michigan and even Toronto, Canada. There is no end to the Stephen Moyer fandom, and we certainly showed it.

Most of our group arrived late Thursday night. They spent the day on Friday going to LA sites that included a favorite Alexander Skarsgård haunt, the now famous restaurant in LA, “Jones On Third.”

All of us got together on Friday night for dinner at the hip and trendy restaurant in Venice, CA called James Beach. It’s right across the street from the Canal Club where the Darnell Fundraiser was held and it was a “hoppin'” place Friday night, I can tell you. Gym and I had Cosmo’s and Kell and Lou were drinking some crazy drinks that I don’t even know what they were. Kell kept saying that she was “buzzed” and so was I. We had a blast as the photos below indicate.

We also celebrated the upcoming birthdays of two from our group, Kell, and Tutu. HAPPY BIRTHDAY TUTU AND KELL!!! 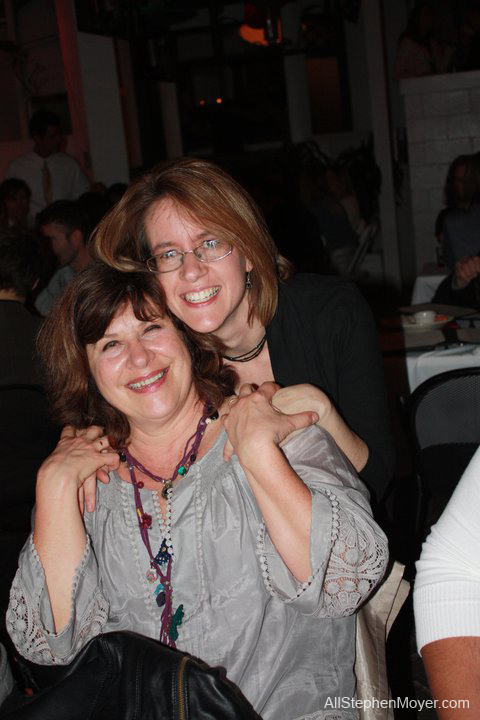 We ended our evening after dinner (which was almost 11 pm) because we all wanted to get a good night’s rest in order to be at the Saban Theater early on Saturday to stand in line. We parted ways until Saturday at about 10 am.

The day of Paley, that we all had been waiting for FINALLY, arrived!

One of the girls, Lou, was staying with me and, after some early morning shenanigans of me locking us out of my apartment, we got to the theater a bit later then we wanted to, at about 11 am. We all had tickets, but they were only for a particular section in the theater. Therefore, we knew that if we got into the theater first, we would be able to get the best seats in the section, so being at the front of the line was essential. However, even though Lou and I were late, all was well because we found several of the girls already in the line and we added ourselves to the queue. Then, several more of our group showed up and we all had primo spots. We essentially stayed in line until 6pm when the doors to the theatre were scheduled to open. 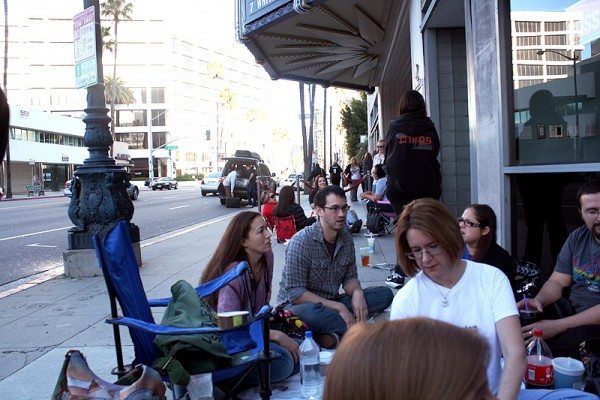 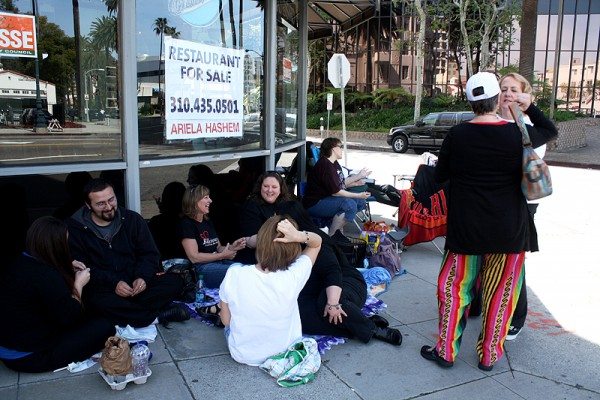 During our day of waiting, we also met many other True Blood fans. While most of us are Stephen Moyer fans, some of us were also sympathetic to The Viking and we even met many Eric fans in line and it was great.

The Line didn’t become very long until about 4 pm. Then, it got really, really long. I walked down it with my friend Melodie and we actually got to interview a couple fans for the Vault. You can see my “official” report here that includes a video of those interviews. I didn’t see too many costumed folks this year, (I attended the PaleyFest 2009 and I remember seeing several Sookie’s in line at that time) and therefore, I’d have to say that standing in the line wasn’t as crazed as it was in 2009.

Shortly before the doors of the theater opened, we also all got interviewed by FEARNET.COM as a group. I can’t wait to see the hilarity from that video. They asked us all to scream and jump up and down, which we did. Oh no, this video should be embarrassing. 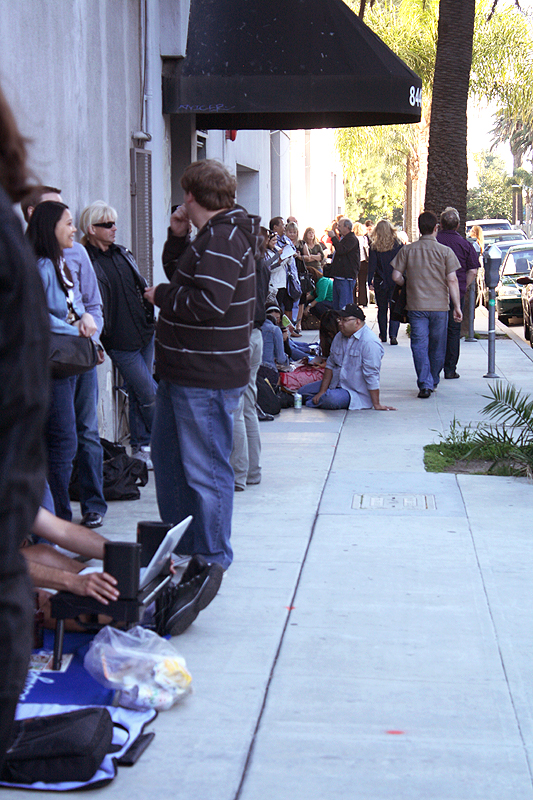 Finally, at about 6 pm we were let into the theater. Unfortunately, our group had to split up because some of us had seats in the orchestra “front” and some in the orchestra “rear”. I sat with five of our group in the orchestra front section in row 3. We all watched the show and panel that included all sixteen of the cast members. That stage was really crowded, but it was an awesome evening. 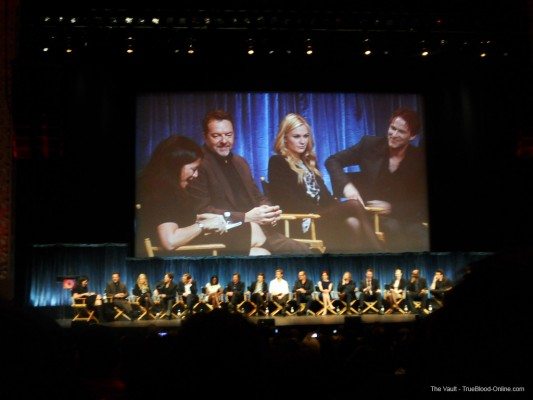 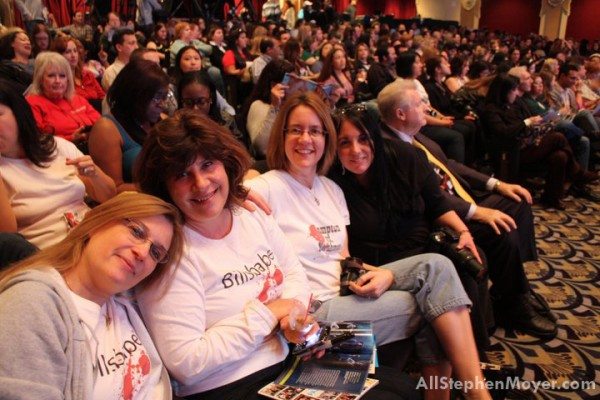 After the panel ended, there was the “storming of the stage”. Oh My God, what a crush it was. Every single fan ran to the stage, as is Paley tradition, to get a photo or an autograph. Since I’ve been lucky to meet most of the cast already, my role here was to help as many of our group to get an autograph and/or pic if possible.  We pushed forward as much as we could hoping to get to, of course, Stephen Moyer. See my story about the “The Naughty Billsbabe Bite Me Bill Thong“.

Once those at the stage got their autographs and photos, the next, and the almost impossible task was to get out of there. It turns out it was “easier said than done”. For at least 20 minutes (but it seemed longer) we were crushed in the middle between the stage and the seats.  Some of us were about to faint, and one of us got a forced “lap dance” with someone in front of them. Finally, we all just decided to jump over several rows to get out.  Once out with our lives, we decided to head outside to the corner where we knew the limos would be sitting waiting for the cast members.

Lucky for us, Stephen and Anna, as well as Marshall Allman and Kristin Bauer, came out after the event to sign autographs. Below are some photos of some of us getting photos and autographs in a much more congenial environment than we were able to get to the “stage crush”.

Lou and Filmchick3 with Stephen

Tutu with Stephen and Kell and Dina with Kristin 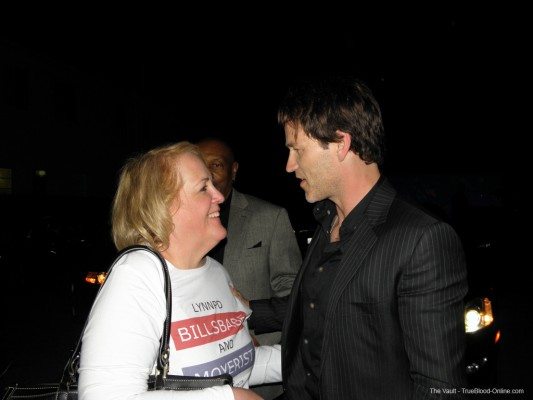 Me talking to Steve

Anna and Stephen stayed signing autographs and posing for photos for almost 20 minutes, and then left, but before they did, I got another hug from Stephen. YEA!. Unfortunately, we never got to see Marshall Allman but did see Kristin Bauer who came out to meet the fans later and some got photos with her.  I was especially happy that Lou got not only a photo with Steve but several autographs, since she went home empty-handed when went to Comic-Con last summer.

It was a great night, we were all exhausted, but it was so worth every single minute, even the crush part.

See the many photos from the night in the photo Gallery!


Thanks to all who donated information for this post, including ThelLou for putting up with me over the weekend, and her photos. Thanks to Skarsgardfans.com for their images and to all the Billsbabes who donated photos, especially Filmchick3, Gymvamp, and Sue.  If I neglected to mention you, it wasn’t intentional, so please email me and I’ll be sure to add you as a contributor.
BillsbabesPaley Fest 2011