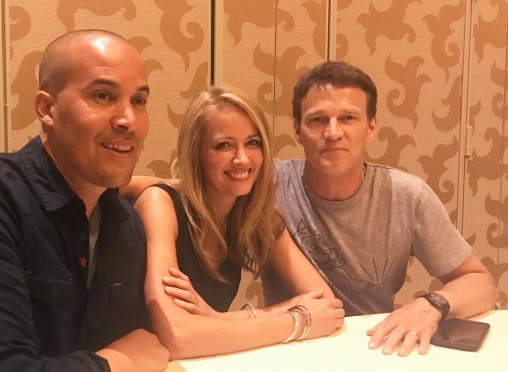 Here’s one more Comic Con video interview with Stephen Moyer and his fellow cast members, Amy Acker and Coby Bell. The Marvel Report interviewed them about their parts in The Gifted and we do learn a couple of new things from them in this video.

Stephen (Reed Strucker) said that he actually finds it a relief not to have powers in The Gifted, even going so far as to playfully mock the expressions and stances actors with powers must take. “It was one of the reasons I was so drawn to it… Drama is about what happens when something difficult happens to ordinary people.” And Reed’s dilemma in particular is about doing the right thing versus protecting his family, which gives a lot of meat to work it.

Acker also drew an important parallel to today’s political and cultural environment, suggesting that the Struckers are in the same position as many Americans who realize: “Maybe I should have been doing more all along.” Bell added to that, saying, “The show in general [is] a great way to tackle issues that are happening in our real world without being preachy about it.”

Watch the entire video of their interview below to hear what Amy and Cory had to say about their roles, and be sure to watch Fox’s The Gifted when it premieres on Monday, October 2nd at 9/8c on Fox.