“Shots Fired” will be a ten-episode Fox series which will examine “the dangerous aftermath of racially-charged shootings in a small town in Tennessee” and the majority of location filming will now take place in Morrisville, NC.

The show has already filmed scenes in

but now, the majority of the filming will be done in Mooresville from now through July.

A home in the Cedar Croft neighborhood will be used as a character’s residence, and certain convenience stores and local businesses close to downtown will also be used, among other locations. Fire Marshall Tim Warren has also been in touch with the crew for permitting, as they plan to have pyrotechnics involved in some scenes.

The North Carolina Film Office said “Shots Fired” and two other productions are expected to have direct in-state spending of more than $64.5 million while creating approximately 7,600 job opportunities in the state.

As preparations were made for the filming here, one noticeable difference to downtown that’s already attracting attention is the repainting of the Coca-Cola mural on the side of a Broad Street building. The Coke mural, which was recently re-painted by Asheville artists Scott Allred and Jeremy Russell, will now be a scene reflecting downtown life, including a train, depot and water tower. 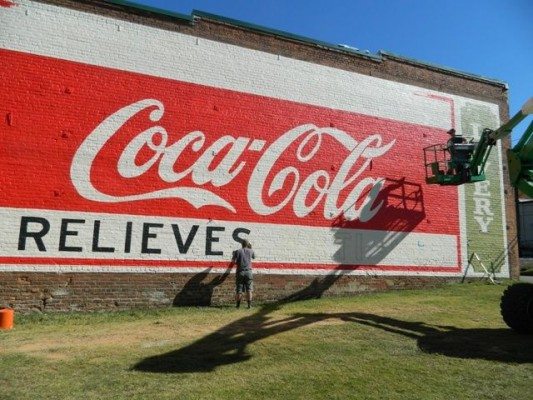 Crews from 20th Century Fox began the painting process on Tuesday and planned to be finished by the end of the week. If the town and building owner wish, the crew will leave the new mural as is when they depart, otherwise the Coca-Cola mural will return at the end of the show’s filming this summer.