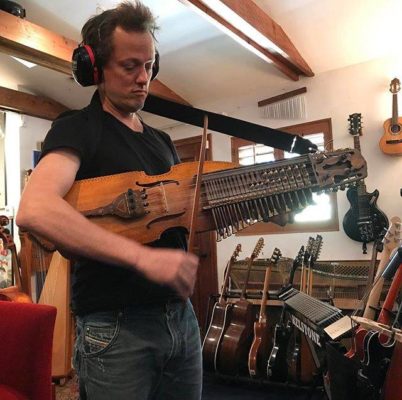 Stephen Moyer posted this morning on his social media accounts that he was with True Blood’s music composer Nathan Barr today.

“Recording live to picture with my amazing friend #nathanbarr #thepartingglassfilm.” He further says that “The instrument he is playing is called a #nyckelharpa.”

The first thing I thought of was how exciting it would it be if this were true and Nathan would actually score the upcoming CASM project!

So, to find out for sure, I contacted Steve asking if it was true and he wrote back the following:

We applaud this move and know that the film just can’t go wrong if the music is created by this awesome composer. When you combine Nathan’s music with the fact that Denis O’Hare wrote the script from personal life experiences; along with it’s great cast including Anna Paquin, Denis O’Hare, Ed Asner and Cynthia Nixon on top of the fact that Stephen Moyer is directing, how could this film be anything but GREAT?