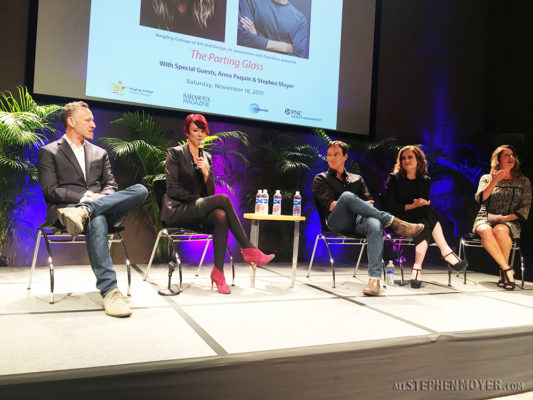 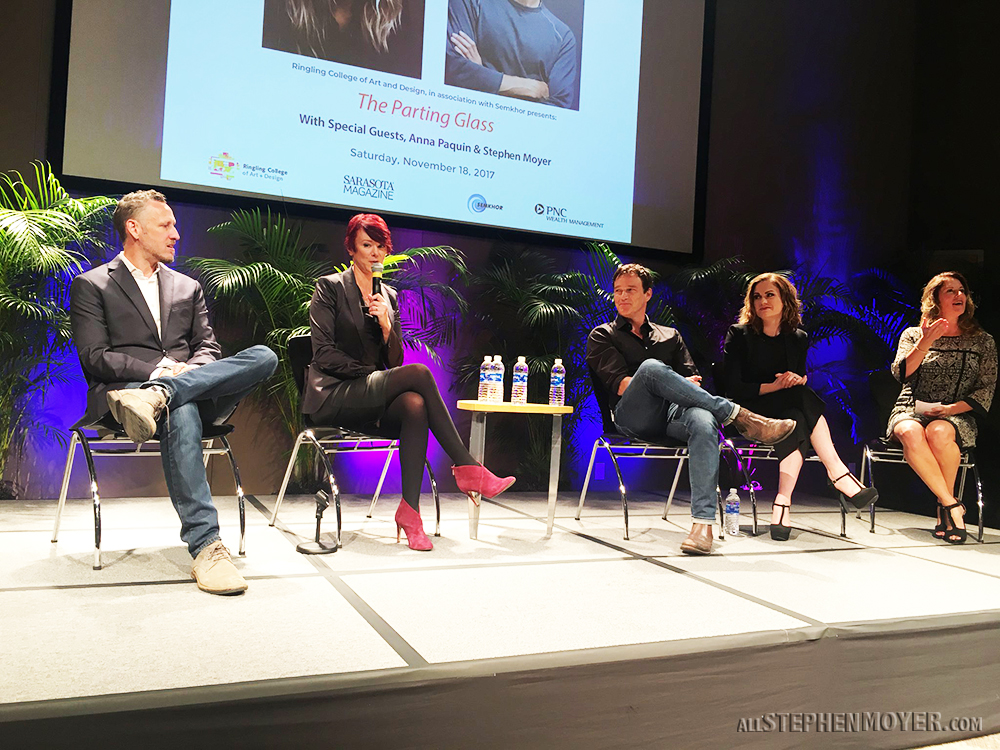 The film marks the second work Paquin and Moyer have created with help from the Ringling College Studio Lab, a partnership between Ringling and Semkhor Productions that both looks to bring more filmmakers to the area and connect them with students.

See our page about FREE RIDE by clicking on the banner below:

In 2012, Paquin and Moyer shot their film “Free Ride” entirely in Sarasota, and that experience has led to an extended collaboration between their production company, CASM Films, and Ringling College.

“For reasons I don’t know, Ringling graciously adopted us,” Paquin said during a private media round table before the event, gesturing to president Larry Thompson, who was also in the room. “I guess that is what they do here at Ringling. They adopt artists and creators of all ages, as it turns out, not just the students.”

The studio lab helped Paquin and Moyer with the development side of their new film, providing funding for them to create a short teaser and help flesh out the script. The film was written by Paquin and Moyer’s “True Blood” costar Denis O’Hare, based on the true story of his sister’s death. It takes place over the period of a weekend when a family reunites to collect their sister’s objects and cope with their grief. After O’Hare told Moyer the story, he told his colleague that he thought there was a film in it.

“It was an emotional story and a difficult story, but what I came away from it with was this idea that it brought everybody together, however hard it was,” Moyer said, “that out of this darkness, some humor came out of it.”

Stephen makes his film directorial debut in “The Parting Glass,” whose title is a nod to a popular Irish folk song that could be sung at the separation of friends at the end of the night or the loss of a loved one. Paquin stars in the film, along with a stellar cast including O’Hare, Cynthia Nixon, Melissa Leo, Rhys Ifans and Ed Asner. The film is slated to be released in 2018.

Although Moyer and Paquin do not have any concrete ideas for their next project with Ringling, they say they’re always looking for new ideas and ways to include the college.

“Pretty much anything that we are doing that they are interested in being a part of I feel like would be very good from our standpoint. We’ve had nothing but really positive really encouraging experiences with them; I feel like we sort of see eye to eye creatively in ways that are really great. We really hope that they continue to feel the same way.”