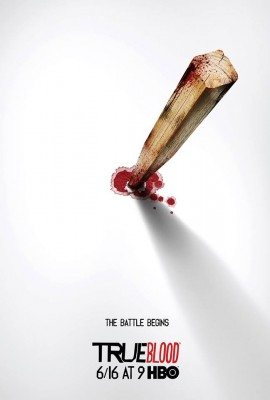 It looks like we will again have a shortened season of our favorite show, True Blood.  According to TVGuide, via showrunner, Brian Buckner, Season 7 will have ten episodes, and probably won’t have a time jump like it did during Season 6, that is unless its the last season. Notice they also mention Sam’s pending new arrival.

Below is the short piece they provided:

I know it’s early, but do you have any scoop on True Blood? — Brandon
NATALIE: Just because the show jumped ahead six months in the finale, don’t expect to see Sam’s hybrid baby in the flesh next season. Executive producer Brian Buckner explains: “Our 10 episodes [usually] take place over the course of two weeks,” which, even on TV, isn’t enough time to hatch a hybrid. But he stresses that if this is deemed to be the final season, things may unfold a little more rapidly.

I am not happy about only getting ten episodes next year, especially if it ends up being the last season. What do you think? Tell us in the comments below.