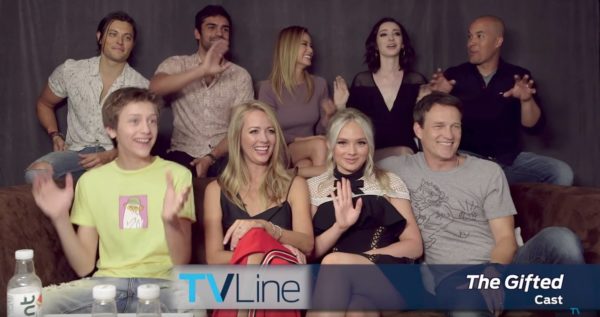 The cast of “The Gifted” Season 1 recently shared some details about their characters in the upcoming FOX series.

While speaking with TV Line’s Michael Ausiello, “True Blood” alum Stephen Moyer described Natalie Alyn Lind’s Lauren Strucker as one of the characters who will develop her abilities as a mutant. “She has the power of creating a barrier for herself,” he said.

Lind was next to describe Amy Acker’s character, Kate Strucker, the mom of Lauren and wife of Reed (Moyer). “She plays my amazing mother, and she is kind of like a badass. She’s one of the characters in our story that doesn’t have powers, but she makes up for that by just being Amy Acker. She’s definitely one of the biggest aspects of our show coz she’s really the one that kind of helps us go through this entire experience,” she said.

Acker also shared details about Andy Strucker, played by Percy Hynes White. Andy is the son of Lauren and Reed Strucker and the younger brother of Lauren. “He is our second favorite child. He’s kinda like the catalyst for the whole pilot because, in the pilot, he gets his mutant powers which are revealed even to himself… He’s very destructive and a little angry, and he’s trying to manage these things. But ultimately, it’s what brings our family closer together,” she said.

After details about the Strucker family members were released, White was asked to describe Blair Redford’s character, John Proudstar. “He is bulletproof… And he’s like super strong, and can see through the future. He can see things, basically,” he said.

Redford, meanwhile, talked about co-star Sean Teale, who plays the role of Eclipse in “The Gifted” Season 1. “He’s a very hot, he’s a very dark character… He has projectiles, he can also do flashlights with his hands,” he said.

Redford also revealed that Teale’s character was not originally featured in the comic books. Eclipse was specifically created for “The Gifted” TV series. One character who was originally from the comic books, however, is Jamie Chung’s character, Blink. “She can create portals and travel through them. Blink actually opens the show…” Teale said of Blink.